Director Damien Chazelle’s last three movies have either ended up on my top 10 of the year lists, or an honorable mention.

His latest film, though, will likely end on 2022’s worst of the year list.

“Babylon” tracks the careers of three characters in Hollywood during the late 1920s and early 30s. Jack (Brad Pitt) is an experienced performer, Nellie (Margot Robbie) is a new actress on the scene and Manny (Diego Calva) is a person doing odd jobs as he works his way up the studio ladder.

The movie shows how their careers are impacted by drugs, the extravagance of the roaring 20s and the shift in Hollywood from silent films to talkies.

END_OF_DOCUMENT_TOKEN_TO_BE_REPLACED

“All Quiet on the Western Front” is definitely not the easiest watch of 2022, but it is one of the better movies of the year.

Based on the famous novel, “All Quiet on the Western Front” tells the story of Paul (Felix Kammerer), a young man who enlists in the German Army in 1917, a year before World War I ended. He enters the war filled with enthusiasm, driven by messages of nationalism during his enlistment.

That enthusiasm dissipates quickly, though, as Paul is thrust into trench warfare. As the war drags on, Paul sees his friends regularly killed in action while facing constant danger in the muddy trenches.

END_OF_DOCUMENT_TOKEN_TO_BE_REPLACED

Director Sam Mendes has made films that offered audiences some magic at the movie theater. His film actually about a movie theater, though, leaves a lot to be desired.

His movie “Empire of Light” stars Olivia Colman as Hilary, a woman working at a historic theater in southern England. Hilary has worked there for some time and has made acquaintances with her fellow staff members, but usually spends her down time alone.

That is until the theater hires Stephen (Michael Ward), a young black man who is trying to go to college, but hasn’t been admitted yet, and in the meantime is working for some money. Hilary and Stephen began spending time together, and eventually form a relationship, but it becomes tested because of personal issues and racial tensions in the country.

END_OF_DOCUMENT_TOKEN_TO_BE_REPLACED

I didn’t always know what was going on in the 2019 “Downton Abbey” film since I didn’t watch the series. That was true again here.

“New Era” has two main stories unfolding. One revolves around a new film being shot at the Downton estate, where Mary (Michelle Dockery) and Violet (Maggie Smith) are keeping watch of things. While the family is hesitant about the film industry using the building, they allow it as it will provide funding to do needed roof repairs.

Meanwhile, the characters Robert (Hugh Bonneville), Cora (Elizabeth McGovern), Edith (Laura Carmichael), Herbert (Harry Hadden-Patton), Tom (Allen Leech) and Lucy (Tuppence Middleton) travel to southern France to explore a villa Violet inherited. The inheritance was included in the will of a man who Violet met decades ago in her youth.

END_OF_DOCUMENT_TOKEN_TO_BE_REPLACED

It’s easy to love “I Love Lucy.” But that’s not the case with “Being the Ricardos.”

The film stars Nicole Kidman, who portrays Lucille Ball, the actress well known for the series “I Love Lucy.” The movie picks up during a week of filming the “I Love Lucy” show, where the production has been impacted by some recent news.

Rumors are swirling around Hollywood about Ball possibly being associated with communism during the height of the Red Scare. The film follows how this affects production, and Ball’s marriage to her husband, Desi Arnaz (Javier Bardem).

END_OF_DOCUMENT_TOKEN_TO_BE_REPLACED 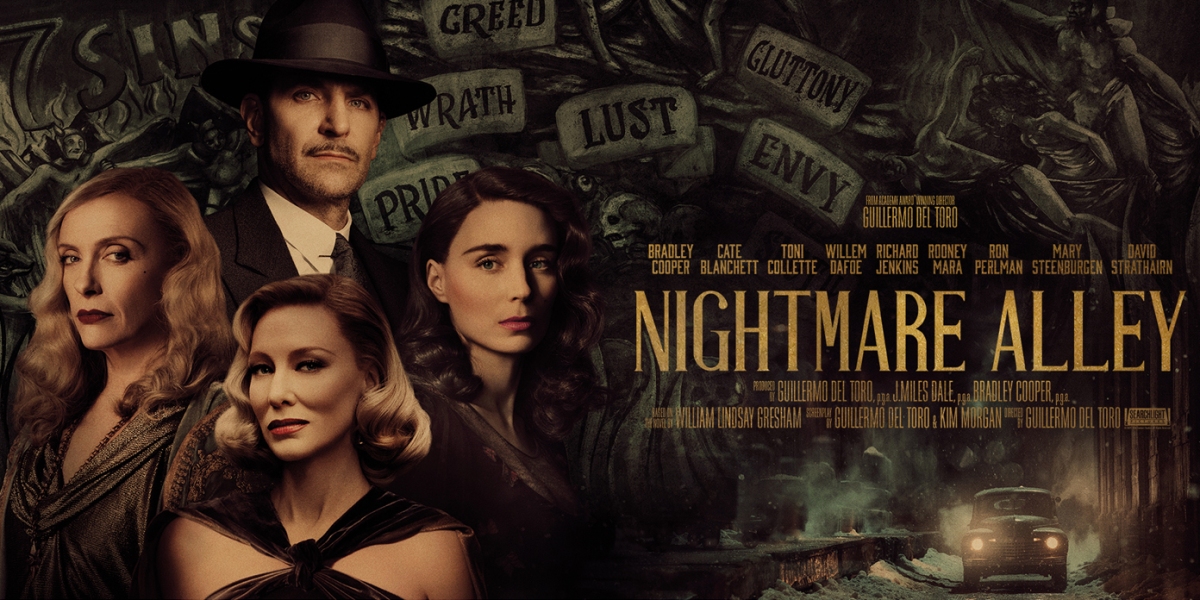 A title like “Nightmare Alley” may inspire thoughts that this film is about fantastical monsters.

But director Guillermo del Toro’s latest film is about how ordinary men can be just as monstrous as fabled beasts.

Bradley Cooper stars as Stanton in the film, a man who’s clearly on the run from his past at the start of the movie. As the film takes place during the later years of the depression and Stanton needing work, he ends up taking an offer to work at a carnival.

There, he meets a husband and wife duo who have an act where they perform as a pair of psychics, although, their mind games are actually just coded words to make it appear that they have powers. Still, Stanton sees an opportunity for himself and decides he would like to do such an act, but his efforts to do so leads to dangers and conundrums.

END_OF_DOCUMENT_TOKEN_TO_BE_REPLACED

The 1920s are brought to life in this new Netflix feature, with a black and white look reminiscent of movies from the era.

“Passing” stars Tessa Thompson as Irene, a light-skinned black woman who lives in Harlem with with her husband, an African American doctor (Andre Holland), and two sons. The movie picks up with Irene out and about one day where she runs into a friend from high school.

That friend is Clare (Ruth Negga), who is African American, but because of her light skin and blonde hair, “passes” as white. The film explores the friendship between Clare and Irene, and how it relates to race and class.

END_OF_DOCUMENT_TOKEN_TO_BE_REPLACED

The beginnings of the Northern Ireland Conflict are shown at a humble, micro-level, through the eyes of a young boy in this new film from Kenneth Brannagh.

The film is somewhat autobiographical, as Brannagh, who wrote and directed, grew up in Belfast, before his family relocated as the situation was heating up. The movie is told from the perspective of Buddy (Jude Hill), who lives with his family, which includes brother Will (Lewis McAskie), mother (Caitriona Balfe) and father (Jamie Dornan).

While his mother is always present, his father is mostly home just on the weekends, as he works as a contractor in England. The work situation comes into play heavily during the movie, as Buddy’s father sees moving the whole family to England as a good option with tensions heating in Northern Ireland.

END_OF_DOCUMENT_TOKEN_TO_BE_REPLACED

Ridley Scott’s historical epics have been rather disappointing, with 2014’s “Exodus: Gods and Kings” and 2010’s “Robin Hood” missing the mark.

Sadly, Scott’s latest effort, “The Last Duel,” doesn’t get in the win column.

“The Last Duel” is set in France during the 1300s and follows three characters, two of them being the knight Jean de Carrouges (Matt Damon) and the squire Jacques Le Gris (Adam Driver), who served on the battlefield together. The third lead character is Marguerite de Carrouges (Jodie Comer), Jean’s wife.

As fellow warriors on the battlefield, Jean and Jacques not only have respect between each other, but a friendship as well. The friendship begins to strain, though, as Jacques begins enforcing rules set by the local Count Pierre d’Alencon (Ben Affleck), which Jean finds unfair. The situation reaches a boiling point when Marguerite accuses Jacques of rape. As a result, the two warriors are set on a path toward a deadly showdown.

END_OF_DOCUMENT_TOKEN_TO_BE_REPLACED

This biopic starts by showing Tammy Faye’s youth, and she just happened to share the hometown of yours truly.

Before her career as a television evangelist, this film shows Tammy (Jessica Chastain) growing up in the small northern Minnesota town International Falls (Go Broncos). From an early age, Tammy loves the energy and music of the church and it leads her to attending North Central Bible College in Minneapolis.

There, she meets Jim Bakker (Andrew Garfield). The two quickly fall in love and soon get married. Rather than continue the college route, the two decide to be preachers on the road. Their talent soon get them picked up on TV and from there, build their own media empire. Unfortunately, it’s all too good to be true for the Bakkers.