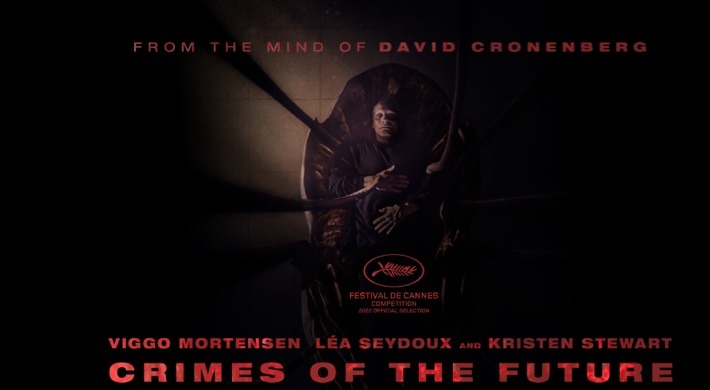 In the “Crimes of the Future” world, there are two separate, yet equally important groups. The police who investigate crime, and an organ registry office to track human evolution.

These are their stories.

In the future portrayed in this film, humanity has evolved to the point where people no longer experience pain and are immune to infectious diseases. Evolution hasn’t stopped there, though, with some humans having bodies that create additional organs with no function, and others having a digestive system that can dissolve plastic.

Both evolutionary traits have gotten the attention of government agencies. Thanks to a man named Saul (Viggo Mortenson), the former trait has also gotten attention in cultural circles. He has made the removal of these organs into a show, as he allows an audience to watch these surgeries, which are conducted by an artist named Caprice (Lea Seydoux).

What’s really amazing about David Cronenberg’s latest feature is that while it’s wonderfully weird and showcases a strange future, there’s still a lot of truth in it. There are people pushing the boundaries with art, law enforcement that has contempt for a minority population and a group that sees problems with the world considering revolution.

There’s a striking balance Cronenberg finds between keeping the film grounded with societal realism, while also fully embracing the horror and science fiction genre aspects. It allows a viewer to be engaged by the film’s in-world politics while also appreciating the body horror and the futuristic tech that the characters utilize.

In some scenes, the film explores characters’ sexuality and how it’s changed with pain no longer being a factor. In others, the human body and its evolution are considered with a more scientific lens. The moments where the body is opened or cut can be graphic, but they all serve a purpose in what the film is working toward.

Humanity’s relationship with the Earth is also incorporated. Not only does the setting seem hotter because of climate change, but the fact that some people in this world can consume plastic is a major point.

Plastic is something humanity has made and spread across this planet, and the concept that it may be the one thing that people can in the future of this world is darkly poetic.

In addition to the writing and directing by Cronenberg, “Crimes of the Future” also gets a big boost from its cast. Viggo Mortensen, for example, does sensational work in one of the lead roles. Saul is a really fascinating character, he can be mysterious and closed off, even intimidating, in one moment, and then in the next, sensual and vulnerable.

Saul’s character is also evolving in more ways than one, as it appears like his outlook on art and the world around him seems to be changing. All of these interesting factors are brought to life by Mortensen’s performance.

The same can very much be said for Lea Seydoux, who is phenomenal as the co-lead character Caprice. Seydoux is especially memorable during a major event in the film’s third act. Credit also has to go to Kristen Stewart and Welket Bungue, who both have limited screentime but really do great work during their scenes, especially the former.

This is a film that one wishes was a bit longer, just for the chance to explore more of this world. On top of the positives noted above, the film also looks great thanks to the technical aspects. The special effects for the surgical scenes and the bio-mechanical technology featured in this future all looks great. 4.5 out of 5.

One thought on “REVIEW: ‘Crimes of the Future’ is a fascinating sci-fi creation”