In 2008, the first Marvel Cinematic Universe movie featured the Ten Rings as an antagonistic organization.

More than a decade later, we finally get a look at the group’s true leader, and his family.

Tony Leung stars as Xu Wenwu in “Shang-Chi,” a man who has lived for centuries thanks to his 10 magical rings he wields. For most of his life, Wenwu had been focused on conquest, leading an army known as the Ten Rings. However, this changes when he meets Ying Li, a woman from a mystical land.

Wenwu ends his warrior ways as he gets married to Ying Li and they have two children, one being Shang Chi (Simu Liu). However, following the loss of a family member, Wenwu once again takes his old mantle while also training Shang Chi to be a skilled warrior. But when the time comes for Shang Chi to go out on Ten Rings a mission, he opts instead to leave his family and the Ten Rings organization and start a new life in the United States.

“Shang Chi” is solid Marvel entry with an enjoyable marital arts adventure… for the first half. “Legend of the Ten Rings” starts off exceptionally strong with a good dynamic between Shang Chi and his friend Katy (Nora “Awkwafina” Lum), as they’re thrust into dangerous situations because of the former’s family history.

From a superb action set piece on a bus to a fun sequence in an underground fighting ring, “Shang Chi” works pretty well. Until it doesn’t.

In the second act, Shang Chi and Katy are brought to his father’s hidden, mountain compound, and the movie’s momentum drops. The scenes of Shang Chi and his father speaking with each other simply don’t carry the same weight as, say, those in “Captain America: Civil War” or “Black Panther.”

There’s animosity between the father and son because of what happened in their past, as well as a clash in personalities. Shang Chi appears as more of a free spirit who goes with the flow while his father is a firm, stoic and more conservative person.

This could’ve been an interesting situation with the two having conversations, showcasing Wenwu’s wisdom and Shang Chi’s rebelliousness. This could even have been done during a sparring session to keep action on the screen.

Instead, Wenwu spends one of their scenes together referencing the events of “Iron Man 3” and relies on flashbacks to do the rest. The references to the third “Iron Man” movie continue as a character featured in that film comes back into the picture to serve as comic relief, as if the film wasn’t confident in Awkwafina carrying the load in that capacity.

The third act doesn’t get that much better. The film has the protagonists travel to the mystical land where Shang Chi’s mother was originally from. There, Shang Chi meet his aunt Ying Nan (Michelle Yeoh), who gives him a rushed crash course in the history of the magical world and how to control his inherited powers.

Katy, meanwhile, has a random, short subplot where she learns to become an archer. She hadn’t been shown to have interest in archery, yet she’s just thrust into this role because the movie needed to do something with her in the final battle. Even her just saying she was a Hawkeye fangirl or something would have helped this subplot feel more in place. 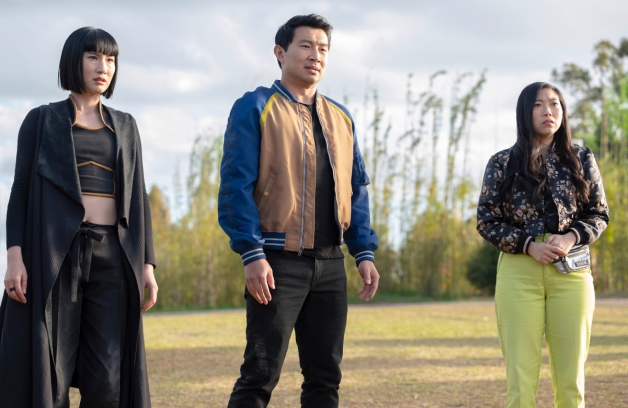 The action itself has its ups and downs. The martial arts sequences are a real joy to see. Watching Shang Chi take on baddies on a city bus is especially great. With the escalation of power in the Marvel films, seeing hand-to-hand combat was a real treat.

However, some of the more fantastical battles become a bit exhausting. The final battle involves two giant creatures crashing into each other as flying monsters attack, and it’s just a bunch of CGI being shoved on screen.

The action felt so much more grounded and made the situation have stakes when battles with these expert fighters were taking place in the middle of busy cities.

“Legend of the 10 Rings” does earn points for its cast, though. Awkwafina definitely shows off her comedic chops while still bringing heart to the role, making Katy a character an audience can connect with.

Liu, meanwhile, is really good in the leading role. The way he portrays Shang Chi as a reluctant hero who’s fairly laid back and comfortable with a simple life, but can step up to the plate when needed, is enjoyable.

The cast is fairly well rounded, too, with Leung fitting in nicely as the stoic father and Meng’er Zhang doing fine work as Xialing, Shang Chi’s sister who’s resentful that her brother left without a word. Florian Munteanu, though, is rather forgettable as the main henchman Razor Fist.

“Shang Chi” is a Marvel movie with plenty of pros and cons, putting its rating right in the middle. It’s a fun Marvel flick that can entertain an audience for its two hour runtime, but it certainly loses steam and isn’t in the upper tier of the studios’ entries. 3 out of 5.

One thought on “REVIEW: ‘Shang Chi’ is sufficient, but not sensational”