The month of October is perfect for scary movies with Halloween as the grand finale. In most cases, it’s a good time revisiting those classics like “Psycho” and “The Shining.”

However, it can also be fun checking out some pure schlock. The best way to do that is with B-movies. Low on budget and often high on cheese, these flicks are often fun to view with friends over a couple beers.

In the last year, thanks to the Roku channel B-Movie TV, I’ve been able to watch more low budget features and like last year, I’m going to be giving my thoughts on what I’ve seen.

As a very low budget zombie horror, “Flesh Eater” does some things really well and others, not so much. Where the film succeeds the most is with its special effects.

The zombie attacks are brutal and are full of that old school blood one would see in the Hammer films. While the gore doesn’t look convincing at every moment, it’s still rather effective.

“Flesh Eater” also has an authentic Halloween atmosphere. The movie certainly looks like it was shot during autumn and it helps put the audience into the moment.

What causes “Revenge” to completely crash, though, was how damn repetitive it is. There’s no real progression of the situation, it’s just zombie attack after zombie attack with all of the characters treated as fodder. Main characters never really get to be fully established here because they die off that quickly.

It doesn’t help that what seemed like the same five seconds of music is constantly played over and over and over again. Another thing in the case against “Flesh Eater” is how it really rips off the end of “Night of the Living Dead.”

This movie is 80s to the max, and that makes it pretty fun. This film is also a Mexican one, but I watched the film with a glorious English dub full of cheesy, hammy acting, making it all the more entertaining.

Not only is this an 80s slasher. It’s an 80s slasher largely inspired by “Nightmare on Elm Street.” The antagonist is a wise-cracking, Freddy Krueger-like villain, who actually has some solid make-up work for a lower budget feature.

The teen horror antics and the film’s villain make it an entertaining watch, as does the main protagonist, who spends much of the movie comically in dinosaur pajamas. The only major issue with this one is the lack of really memorable kills. 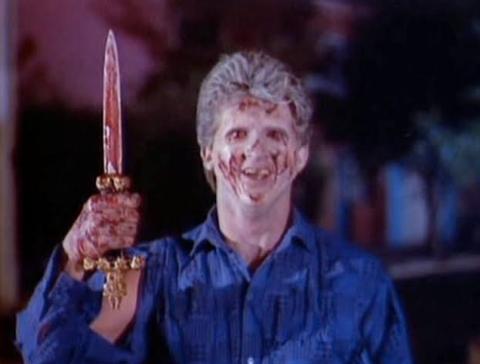 Despite this detriment, though, this is a fun slasher and it even comes with its own wonderful 80s song. This one’s alright.

3 out of 3 dinosaur shirts. 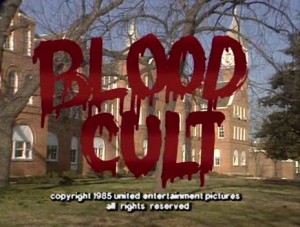 “Blood Cult” starts off rather strong with a shower murder scene, a la “Psycho.” This one is a shot on video, or SOV. Many SOVs popped up in the 80s as more people had access to video cassette recorders and just went out and made movie on their own.

As a result, out of all the movies in this post, “Blood Cult” is by far the one that looks like it has the lowest budget. Despite the lower budget, though, there are some fun props and effects here. Along with the opening scene, there’s also a rather fun segment that takes place in a cafeteria.

Unfortunately, after a while, the movie kind of goes off a cliff, as we follow a rather dull investigation by the main character, who’s an older sheriff.

The SOV format does give the movie a bit more of a grimey, late night drive-in feel that works to an extent. The third act is a let down, though, in an experience that had already lost steam.