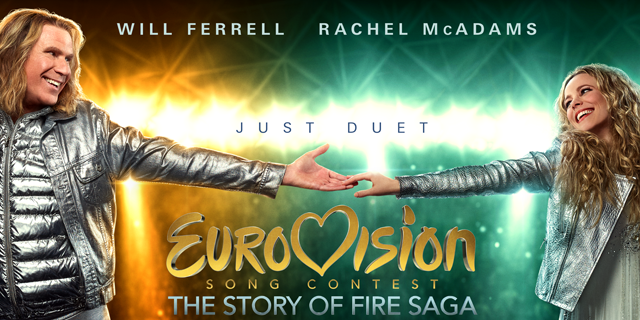 Will Ferrell is back with another silly character and this time he’s joined by Rachel McAdams in the co-leading role.

Ferrell portrays Lars while McAdams stars as Sigrit, with the two forming the music duo Fire Saga in this feature from Netflix. The two aren’t exactly the best musicians, and their skills have only earned them local gigs in their small Icelandic fishing town. Despite a lack of superstar success, though, Lars still has a dream of competing, and ultimately winning, the Eurovision Song Contest.

In the movie, Fire Saga finally gets their chance, as they sort of stumble their way into the contest, representing Iceland in the process. Upon their arrival, Lars and Sigrit meet their competitors and learn about how much of a challenge it will be.

“Eurovision” has a clear issue noticeable right from the early moments and that is how absurdist it plays the situation. The main characters are so noticeably over the top and the situations are played out in such a wacky manner that it is impossible to take anything seriously.

That’s not a complete death knell, but it tries to have those aspects, and then also attempt to work in some heart with the main relationship and more political humor, mostly shown with Iceland’s government officials. This basically causes an imbalance, where the movie will lean toward parody territory, but then swing to more of a straightforward comedy.

Compared to other Ferrell films, in some cases the movie seems more like “Anchorman,” and in others closer to 2017’s “The House.” The inconsistency works against it.

On top of not necessarily finding a better balance in its comedic story-telling, the movie is also way too long. The biggest example of the movie running too long is a completely unnecessary segment with a car having to drive across town at high speeds. As a whole, the whole thing feels stretched thin.

With that said, the movie does at least produce some laughs. Effective comedy is more scattered throughout inconsistently, but humor is there in some scenes. Some of the jokes do land pretty well and a few visual gags are fun.

But where the movie really gets the most humor from are the performances. The music here and the artists performing them are all rather eccentric and as a result, their bizarre works on the stage make for some laughs.

As for the cast, McAdams is the definite standout, bringing a lot of passionate comedic energy to the role. Dan Stevens is a lot of fun, too, portraying a flamboyant Russian musician.

Farrell, though, is somewhat hit or miss. While he of course has a screen presence and comedic timing, it also just feels like Ferrell is doing another wacky character that would be more suited to a sketch.

At the end of the day, “The Story of Fire Saga” is a comedy and in some cases, it does create some laughs. The execution of the film’s concept has too many issues, though and it simply doesn’t warrant a two hour runtime. 2.75 out of 5.

3 thoughts on “REVIEW: ‘Eurovision’ doesn’t have enough laughs to carry it for two hours”