In day-to-day life, one’s home is a place to hang their hat and relax, or invite friends and family for an event.

In movies, though, a house can become a rather chaotic place, especially when it’s filled with different, and at times, conflicting personalities bouncing off each other. In certain flicks, it can even be a trap that one can’t escape from.

Considering most of us have been and will likely continue spending a lot of time at home because of the corornavirus pandemic situation, I decided to make a list all about films largely taking place at one house.

As someone who once hyper-extended their knee and had to sit on the couch for basically a month waiting to start physical therapy, I can really understand where Mr. Jefferies is going through here. Fortunately, for the main character played by Jimmy Stewart, his neighbors provide some entertainment.

That entertainment turns to suspense, though, when Jeff sees one of the residents across the garden in another apartment do some suspicious activity. Hitchcock does incredible work making the film an engaging murder mystery with some very thrilling moments. The film also shines, though, thanks to the interactions with the characters, especially the main trio of Jeff, Lisa (Grace Kelly) and Stella (Thelma Ritter).

The Overlook Hotel became a home for the Torrance family, and it didn’t really work out in the long run. Kubrick brilliantly makes an audience feel trapped and isolated, despite the hotel being a large, sprawling location.

There’s an interesting question on whether what Jack did was caused by a perfect storm of the hotel being haunted and his son’s ability amplifying it, or if he would have snapped regardless of what building the family made their home. Along with Kubrick’s fantastic direction, this one of course benefits from the performances of Jack Nicholson and Shelley Duvall.

Writer John Hughes and Director Chris Columbus teamed up for some holiday magic here. This film is a wonderful mix of comedy and action, and it also has a lot of heart.

“Home Alone” works so well because of the phases Kevin goes through in relation to the house itself. At first he basically makes it his playground, then he comes to appreciate the fact that his house is only a home when his family is there. Finally, he is motivated to defend that home.

Macaulay Culkin of course had many memorable moments in the picture and the feature was definitely helped by Joe Pesci and Daniel Stern in the antagonist roles. 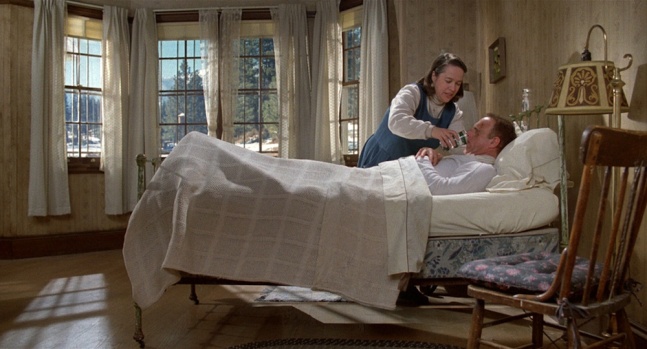 Being a guest in another’s home is supposed to be a pleasant experience. That unfortunately isn’t the case for famous author Paul (James Caan). Kathy Bates certainly earned her Oscar for portraying the character Annie, but Caan also deserves plenty of credit for portraying this man who’s completely trapped.

While it looks like a charming, rural farmhouse, Annie’s home is hell for Paul, who has to do a lot of quick thinking and problem-solving in this picture. The whole movie keeps a viewer in suspense. 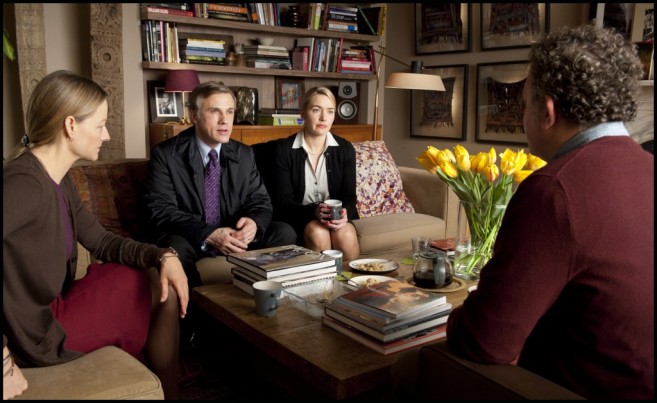 This film is a prime example of the pen being mightier than the sword, because the script written for “Carnage” has a lot of language that cuts deep. Based on a 2006 French play, “Carnage brings out all kinds of savagery from its cast as emotions run exceptionally high.

The movie is all about things that are left unsaid and quiet frustrations rising to the surface, where they explode in fiery exchanges. From relationships to class divisions, everything is thrown on the table here, and it all takes place in a single apartment. It doesn’t hurt to have three Oscar winners in Jodie Foster, Kate Winslet and Christoph Waltz, along with an Academy Award nominee in John C. Reilly, either. 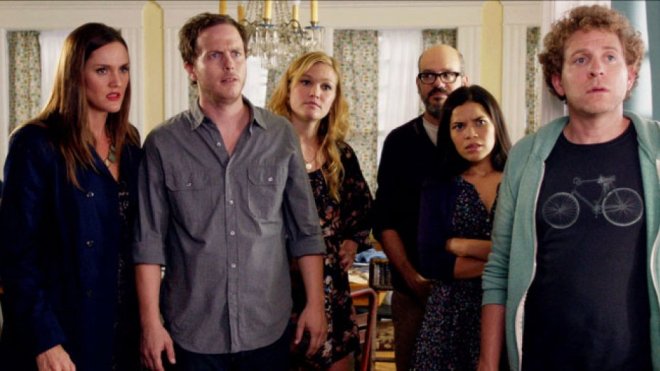 This black comedy came out a few years ago and sort of went under the radar. It definitely deserves to be watched, though. The movie is about a guy going with his girlfriend to a brunch at her friend’s house, and he’s kind of the odd one out. The situation is already a bit awkward, and then it’s all made even more chaotic when it turns out there’s a biological attack taking place.

It forces all kinds of personalities to be trapped in this house during this wild situation and comedy really does ensue. Director Todd Berger also wrote the strong script. It’s really helped by a solid cast that includes David Cross, Julia Stiles and America Ferrera. 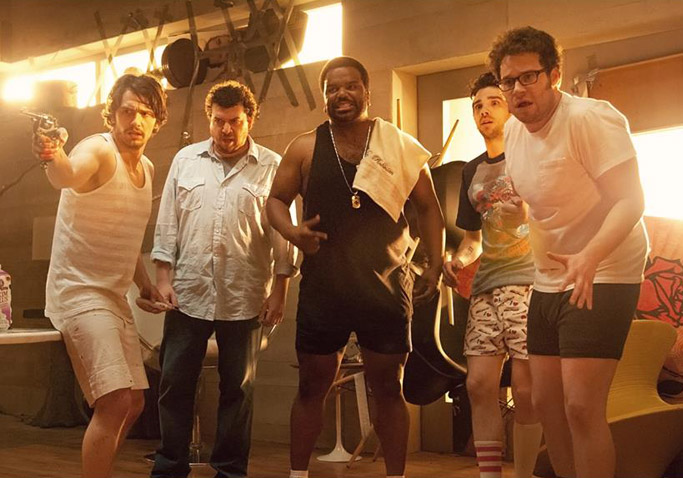 Absolutely bursting at the seems with self-referential comedy and meta humor is this feature which all takes place at the home of James Franco. While Evan Goldberg and Seth Rogen are listed as the two writers, I have to imagine the cast-members like Franco, Jonah Hill, Jay Baruchel, Danny McBride and Craig Robinson all had some input.

Watching this cast of comedy actors, with many of them having starred in movies together before, play exaggerated versions of themselves in an increasingly absurd situation is downright hilarious. Everybody here has so much chemistry on screen and it looks like they had a blast making this.

“Ex Machina” is a brilliant sci-fi picture and it all takes place in the high tech house of a tech mogul. The house is an amazing building, a true technical marvel. However, it soon becomes a frightening place to stay in this mind-bending thriller.

As the movie goes on, the main character played by Domhnall Gleeson becomes unsure of who to trust, and it’s the same for the audience. All of this mistrust becomes more intense, with Gleeson’s character being trapped in this high tech house the whole time. Rounding out the cast was Oscar winner Alicia Vikander and Golden Globe winner Oscar Isaac.

The movie won an Academy Award for visual effects and earned a nomination for original screenplay.

Brie Larson won an Oscar for her role in this film, and the picture earned three other Academy Award nominations. “Room” certainly deserved the accolades. It’s a frightening drama, with its main character going through hell in a tiny living arrangement.

Larson is absolutely superb in the lead role, as her character is an abduction victim and has to survive and raise her son in terrible conditions. Director Lenny Abrahamson and Cinematographer Danny Cohen deserve a lot of credit for having nearly half of this movie take place in this small area, and capturing the way Larson’s character tries to make it into somewhat of a livable space for her son. 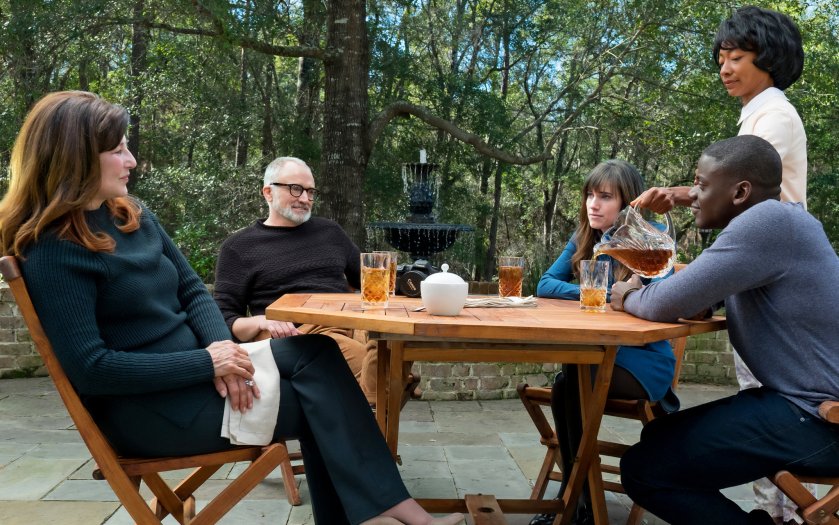 This is another movie where being a guest in another’s home isn’t as pleasant of an experience as it should be. Jordan Peele, who wrote and directed this feature, did exceptional work here, incorporating humor, social commentary, thrills and interesting characters.

The movie rightfully won an Oscar for its screenplay and earned three other nominations including Best Picture.

The most recent Best Picture winner is a movie that takes place mostly in two different homes, and the disparity between each living arrangement has a lot to do with the commentary the film provides about class divides. The main characters live in a small basement apartment, and later con their way into working for a family who have a state-of-the-art, modern home.

Director and writer Bong Joon Ho certainly incorporates more commentary and visual cues than just the homes. The characters are fantastic, the pacing is superb and the script is loaded with other examples of social commentary, along with dark comedy and suspense. There’s no doubt, though, that one of the most noticeable differences between the two families is where they live.

The film was one of 2019’s best and earned some well deserved hardware from the academy.