One of the nice things about the Academy Awards is it shines a spotlight on movies some people haven’t seen.

More often than not, documentaries end up in that category, as they usually lack theatrical releases. As usual, five docs were nominated for the gold statue and I managed to see all of them. Here’s my takeaway. 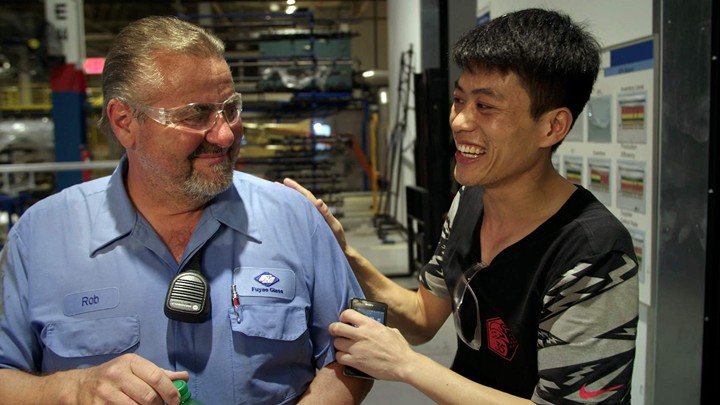 “American Factory” is definitely one of the more interesting docs released in 2019. The movie explores a Chinese company re-opening a factory in the Midwest that had closed following the Great Recession.

The result is a series of culture clashes and insight into how both Chinese and American workers view labor and income. It really holds a viewers attention, as an audience not only learns about another culture, but also gains more knowledge about corporate power on an international level.

Where the movie stumbles, though, is in the overall presentation.

“American Factory” has a somewhat hands-off approach. There’s no narration, as the whole movie is basically told by workers that are interviewed. While this provides a raw look into the situation, the movie is also kind of lacking something to say.

This is really clear at the end of the movie when the subject of automation is brought up when it had no prior reference. There’s a feeling the filmmakers wanted to get a point across, but didn’t really execute it well.

Set in the besieged city of Ghouta, Syria, “The Cave” is an amazing movie about the human spirit.

The movie is about a network of underground tunnels used by doctors who’re working to save lives in the middle of the Syrian war. One of the lead figures at the underground hospital is Dr. Amani Ballour, who’s trying to keep the operation running despite dwindling resources and constant bombings.

“The Cave” is a fantastic watch because it gives an audience insight into another part of the Syrian war and the people involved. It’s a harrowing, powerful experience for a viewer.

However, the film isn’t just good for its portrayal of a group of people overcoming tremendous hardship. It’s also fantastic in that it shows the humanity of those seen on screen.

There are moments of downtime when those at the hospital are able to joke, chat and at one point, even have a birthday party. The moments make the doctors even more endearing and create so much emotional investment.

The Edge of Democracy

“Edge of Democracy” was unfortunately a film I found to be somewhat unfocused and messy. As someone who has not closely followed the political history of Brazil, I found myself constantly playing catch-up in the first hour as a lot of details are quickly given, while the movie bounces back and forth between time periods.

A good example of this is when director Petra Costa introduces the political parties, but doesn’t give information on their platforms. Viewers unaware have to pick up on their own which party leans left and right.

The subject matter is really strong here, and Costa deserves credit for following it so closely. However, one wishes she would’ve provided a more well-structured documentary for those not as aware. Even some graphics regarding things like party control, timelines and economic statistics could have really helped here.

“For Sama” is a deeply personal film and another documentary set in the tragic Syrian war.

It’s a story about a woman who had hope and brought a child into the world, only to have the conflict break out. Filmed and narrated by Waad Al-Kateab, “For Sama” is an intimate journey through one of the world’s worst conflicts. After seeing other films and news broadcasts take a macro look at the situation, “For Sama” provides a micro level look, resulting in an endearing, heart-felt documentary.

The only real detriment to “For Sama” is the fact that it didn’t start out as a straightforward documentary and it’s noticeable that this is Al-Kateab’s first film project. The film doesn’t have traditional structure and the camerawork isn’t the most professional. However, the power of the story on display here still shines through.

Set in the nation of North Macedonia in southeastern Europe, “Honeyland” is an emotional and dramatic documentary about a person trying to make their way in the world.  The movie tells the story of Hatidže Muratova, a woman who makes a living as a beekeeper in a rural area of the country.

She’s able to sell the honey she harvests at local markets and when she returns home, takes care of her elderly mother. Her way of life and careful, eco-conscious way of beekeeping is upset, though, when a man moves in to the same area with his large family and begin harvesting honey, too. While at first the two sides get along, it soon becomes clear that the man is over harvesting the honey.

The film is so well structured that it honestly feels like a narrative movie at times. The filmmakers did incredible work shooting these individuals, capturing their moments and making them developed characters in a flowing story.  It becomes a really compelling feature to watch unfold.

On top of being a fascinating drama, “Honeyland” is also topical, touching on subjects like overuse of natural resources and factory farming. The movie could maybe just used a little more context, perhaps a few captions to give more details on the country and area. Also, the film has a bit of a slow start. Once it gets going, though, it’s a good experience.