Now, we all know Jimmy Hoffa’s body was taken from beneath a stadium into a UFO by aliens, but I suppose it’s worth checking out what this film’s take is on what happened.

“The Irishman” refers to a nickname given to Frank Sheeran, played here by Robert De Niro. At the start of Director Martin Scorsese’s latest feature film, Sheeran is working as a truck driver in Philadelphia, who delivers meat and earns an honest living. However, after some time, he begins making some shipments to a local gangster, and from there he gets involved with mob boss Russell Bufalino (Joe Pesci). Sheeran begins doing jobs for Russell and eventually becomes an enforcer for the crime syndicate.

Eventually, because of the ties between certain organized crime factions and some unions, Frank comes into contact with Jimmy Hoffa (Al Pacino). The powerful Teamsters President takes a liking to Frank and eventually the two start working together. The work he does, though, is deadly and corrupt. As a result Frank’s life never really settles down.

Despite a length that could be considered a tad excessive, the movie never feels like an exhausting experience, or like it overstays its welcome. Scorsese truly manages to bring everything together in a wall paced, coherent feature film.

“The Irishman” provides an audience with a compelling and interesting look into the rich, deep, and dark, history of Jimmy Hoffa’s relationship to crime. The movie explores the height of organized crime in the post World War II era, its connections to politicians such as John F. Kennedy, and the reach Hoffa had as a leader.

One can really appreciate the exploration of history that takes place in the movie. Viewers are treated to several intriguing scenes related to America’s past such as a moment when one of the characters helps prepare the Bay of Pigs Invasion, or where Hoffa and company reacts to the death of President Kennedy.

While there’s a lot going on here with criminal motivations and political outcomes, though, the movie also stays grounded by connecting all of these aspects to Frank’s personal life. As the picture progresses, the audience sees how everything that Frank did as part of his work transcended onto his family, specifically his daughter, especially in the third act.

It’s Frank’s personal life that allows the viewer to become more aware of the ripple effects that are caused as a result of what takes place in this world. There’s also drama because of Frank’s allegiances to both Hoffa as a friend and the mob which he works for.

As expected, “The Irishman” also triumphs because of its three leads. The trio are legends of the industry, each having won Oscars and their talent is really on display from start to finish.

Pesci is especially fascinating to watch, as character Russell is a calm, but cunning figure. Pesci is known for playing hotheaded characters, but he nails the cool demeanor of Russell, we as the audience know the gears are always turning in the boss’ head and he brings gravity to each scene.

De Niro, meanwhile, does impressive work portraying a character that at first seems to be a blue-collar every-man, but as the film wears on, appears to be a darker, more violent person. De Niro, of course, has experience in both sides already, having portrayed a blue-collar person in “A Bronx Tale” and a mobster in several others, and he brings those traits for “The Irishman” and the result is a compelling performance. 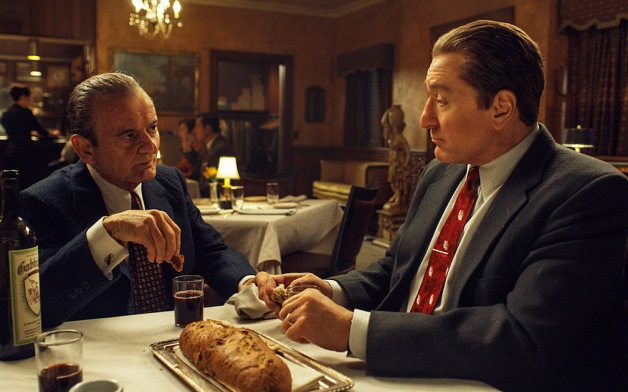 It also has to be noted that Ray Romano lends really solid dramatic work to the picture as a union lawyer.

The only complaint when it comes to the cast is how they look over several decades. There’s de-aging technology used to show younger versions of the characters, but it’s not always convincing unfortunately.

However, Scorsese, along with the crew working on cinematography and production design, do deserve a lot of credit for recreating the era. The grand scope and scale of the film, along with the historic nature of the premise, all shine through here very well.

“The Irishman” is a very well made piece of cinema capturing corruption of a person and a significant portion of this nation’s history and its violent past. It’s a gangster film that shows the harsh reality that really comes with that territory, and it leads to a rather haunting ending.

The film maybe could have been trimmed a bit and the de-aging tech isn’t always spot on, but there’s no denying this is an exceptional picture. 4.75 out of 5.