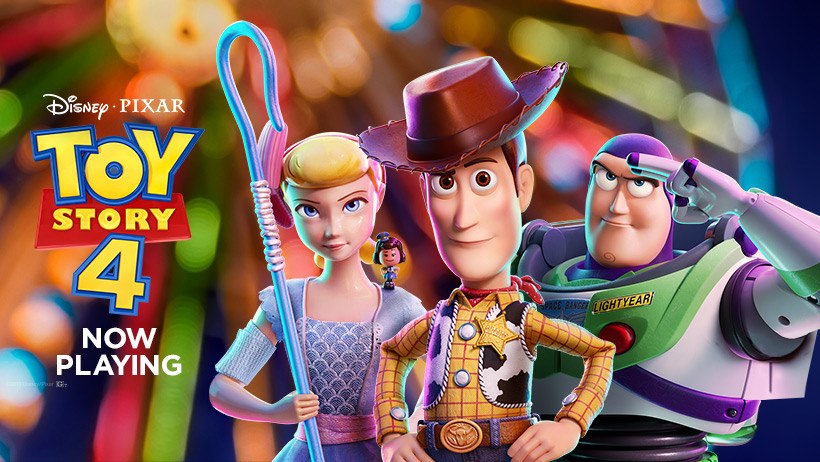 I’ll admit, when I first heard a new “Toy Story” was in production, I was skeptical, considering “Toy Story 3” was such a solid end to the trilogy. Fortunately, Pixar did some solid work with this fourth feature.

The latest film picks up seemingly not too long after the end of part three. The original gang, for example, have adapted pretty well to life with Bonnie’s other toys. That is, except for Woody (Tom Hanks). Woody appears to be involved less and less in times of play, and as a result, is getting little anxious.

However, when Bonnie creates a new toy from some materials, mainly a spork, named Forky (Tony Hale),  Woody finds some purpose. Forky appears to be confused, thinking himself more akin to trash than a toy, but Woody is set on protecting him and keeping him around, as Forky has become Bonnie’s favorite. The work gets more difficult, though, when during a family trip, Forky escapes in a small town near a carnival. Woody sets off on an adventure immediately to save Forky, and fortunately, he gets some help from the long lost Bo Peep (Annie Potts).

Right off the bat, it can be said that “Toy Story 4” is likely the weakest of the Pixar franchise. However, that’s not saying it’s bad, because surpassing those other three flicks is a monumentally tall order.

In all fairness, the fourth “Toy Story” is a rather nice entry, and like its predecessors, carries a very good metaphor about life that’s introduced through the movie’s adventure. This time around, the “Toy Story” is all about creating new chapters in life, and learning to find other avenues to pursue. It’s all very meaningful, especially when the picture arrives at its final, emotionally touching scene.

Like others in the franchise, “Toy Story 4” also features an adventure with new toys along the way. Again, this film’s adventure doesn’t top its predecessors, especially what was featured in “Toy Story 2,” which is arguably the most thrilling of the franchise. This time around, the story simply feels a bit more contained and on a smaller scale.

As previously stated, though, Director Josh Cooley and several co-writers including Andrew Stanton and Stephany Folsom who worked on the screenplay, build something pretty good here. Not only is there the emotional story, but there’s also some suspenseful sequences with great payoffs for the characters. This is true with both the heroes, and the movie’s antagonist, who has a pretty good arc.

The film’s two main locations, a carnival and an antique store, also serve as great areas for some fun moments.

One of the biggest strengths in “Toy Story,” though is its characters and this movie does deliver mostly. Woody and Buzz are of course here and it’s always a treat seeing them on screen. However, it should be noted that the rest of the main crew is somewhat sidelined this time around.

Although, this isn’t all bad, since the movie brings back Bo Peep, voiced by Annie Potts. After being absent in the third installment, the folks at Pixar did great work bringing the character back as a certified bad-ass, able to take on most challenges without breaking a sweat. She’s a definite spark to this movie and provides the film with a lot of infectious energy.

Unfortunately some of the other new characters were a bit hit or miss. Forky, as a toy who’s created rather than purchased or found, is pretty interesting and Tony Hale certainly plays up the character’s crisis in not knowing what he really is. However, the plush characters Ducky and Bunny played by the comedic duo Keegan-Michael Key and Jordan Peele, are a bit too one-note here, and not as memorable.

In the end, though, as a whole, “Toy Story 4” works in a lot of ways, especially thanks to the inclusion Bo. While it doesn’t reach the same heights as its predecessors, it’s still a good animated movie with some real tear-jerking moments during the finale. 4.25 out of 5.