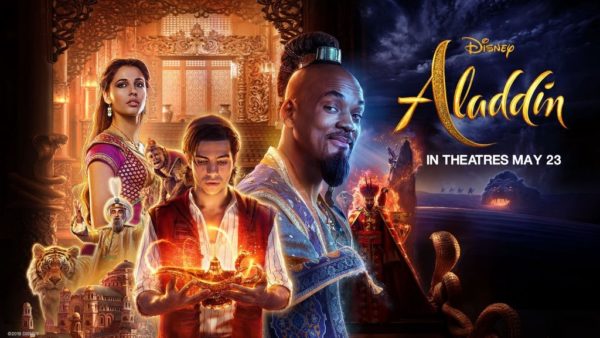 It’s true nobody can replace Robin Williams, but in all fairness, Will Smith probably provides this new “Aladdin” a lot of energy.

The movie is of course based on the 1992 animated feature with the same name. Like that film, “Aladdin” 2019 follows the titular character (Mena Massoud) living on the streets of the city state Agrabah. In his adventures to survive by pick-pocketing and running hustles, he meets a young woman who’s secretly Agrabah’s princess Jasmine (Naomi Scott).

The two form a connection, yet Aladdin of course has trouble getting to know her since her home is at the palace. As part of his desperation, Aladdin comes in contact with a power hungry Vizier, Jafar (Marwan Kenzari). Jafar offers Aladdin riches if he goes inside a cave of wonders and retrieves a lamp. Things don’t go exactly to plan, though, and Aladdin ends up with the lamp and meets a Genie (Will Smith) who can grant three wishes.

It’s the same old story. I had the same feeling watching “Aladdin” as I did watching Disney’s live action remakes of “Dumbo” and “Beauty and the Beast.” While being competently made, featuring talented casts, and even throwing in some new songs, these pictures just don’t surpass their animated counterpart.

“Aladdin” is especially hampered early on with a rather rushed pace. Aladdin’s introduction and his meeting with Jasmine seem to occur a little to quickly as if the movie wanted to get it over. It honestly wouldn’t surprise me since Director Guy Ritchie and writer John August seemed to want to focus a lot of time in the middle.

It appears this way since the movie stuffs in some sub-plots not originally featured in the animated picture. These include a romance between the Genie and one of Jasmine’s care-takers, along with a potential war with another country pushed by Jafar.

Both of these especially stand out, since they’re not really necessary to enhance the characters they’re focused on. Genie already has a compelling goal for his freedom while Jafar has a vision in his mind of being a ruler. While there is some intrigue added, these side stories didn’t exactly make the movie more memorable and did more to make the movie seem bloated.

Also somewhat disappointing is Mena Massoud’s performance as Aladdin. It may just be because he’s acting opposite of Smith, but there were times his portrayal seems too subdued and reserved. There are a few moments when he gets to shine, but his performance could have had more energy.

Scott really does deliver a powerful performance, though, as Princess Jasmine. Like her animated counterpart, Scott’s Jasmine is strong, confident and refuses to be bossed around. At the same time, Scott’s portrayal shows the character’s charm and kindness to win a person over.

The toughest role probably went to Smith, who of course had to make the Genie his own character, considering Williams’ amazing voice-performance. While Smith never tops Williams’ work, though, he does enough to give his own spin on the Genie character and he has enough natural charisma and screen presence to make the eccentric magical being work.

Marwan Kenzari’s work as Jafar was somewhat hit or miss. While he does impressively portray the villain role in a threatening, menacing way, he lacks the slimy and smarmy approach the animated picture had.

That’s really the biggest problem with this “Aladdin.” Yes, a live-action movie will be more realistic, but if that’s the case, is such an adaptation a good thing? To have an adaptation become a more cold, simple attraction?

Decisions like not having Iago talk at all and act like a regular parrot, giving Abu less personality, not having the Genie use his magic as much during the Prince Ali song and having far less magic involved in the climax does in fact make the movie somewhat more straightforward for its live action setting, but the charm and heart is lost in a way.

The 2019 “Aladdin” isn’t a bad film by any means but it pales in comparison to its rich, vibrant counterpart. For the most part the cast is alright here, the music has its moments, there is some clever writing and the film overall looks fine. Yet, the entire time I was watching it, I wished I was viewing another movie. 2.75 out of 5.