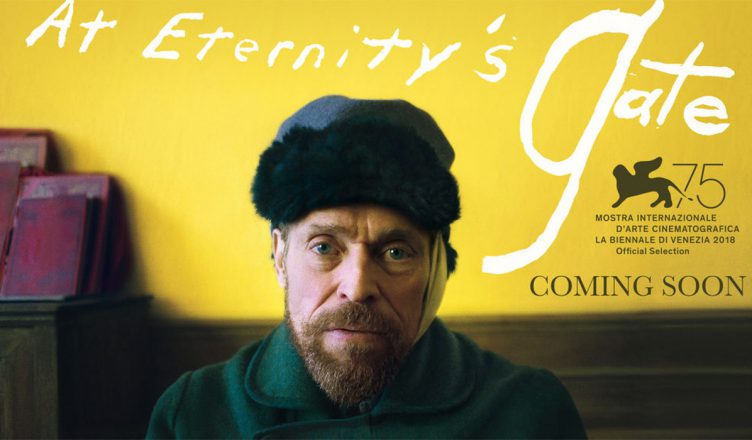 The life and times of Vincent Van Gogh are uniquely portrayed in this feature from director Julian Schnabel.

“At Eternity’s Gate” tells the story of Van Gogh (Willem Dafoe), picking up with him as a struggling artist in France and following his career when he lives in a smaller community.

Along with the work he did on the canvas, “Gate” also takes time to explore and address some of Van Gogh struggles with his mental illnesses.

Going in, one must know that “Eternity’s Gate” is a rather unconventional film from a storytelling perspective. The film does have a structure, but it’s not as straightforward as a more typical biopic.

What does that mean for the overall quality? Well, the film doesn’t always stick the landing perfectly, but it earns high scores regardless.

The unconventional and, at times, erratic nature, of both the storytelling and some of the camera work do provide the film with a certain mystique. It’s clear that this was very much a passion project for Schnabel, not just to tell the story of Van Gogh, but also get inside his head and show what parts of himself were put to his drawings, and this passion does transcend to the audience.

What really makes the whole thing work, though, is the amazing work of Dafoe. He lends arguably the best performance of his career in this film, giving the complicated character layers and a tremendous amount of depth. Van Gogh’s struggles, his sorrow, his joy and his overall love of his craft are all beautifully put to the screen by Dafoe here, and he deserves recognition for his performance. Yes, I’m looking at you Academy.

The supporting cast is also fairly strong here. Oscar Isaac, for example, does serviceable work with his screentime. However, this largely remains Dafoe’s movie.

Any viewer will also notice that “Eternity’s Gate” is shot in a rather uncommon way. The camera work looks as if it’s handheld at a few points and these moments are a bit hit or miss. What’s not hit or miss when it comes to the cinematography, though, is the lighting and colorization, with many moments beautifully capturing Van Gogh’s surroundings and giving insight into what the man might have been looking at when ideas for his art came.

It’s quite apparent that Schnabel has a love for Van Gogh’s work and it does shine through here in this picture. Some of the movie works better than others, and some audiences may not appreciate its more unconventional moments or methods.

However, there’s an undeniable tranquility that comes with portions of the film and it deserves credit for this. 3.75 out of 5.