I knew Peter Farrelly directed this picture going in, but it still seemed strange seeing the name of the person who helmed movies like “The Heartbreak Kid” and “Hall Pass” attached during the end credits.

“Green Book” is titled after a sort of brochure used decades ago in the Jim Crow era which listed hospitality businesses that were safe and/or open to African Americans, mainly in the southeastern United States. The movie follows a lower-middle class Italian nightclub bouncer-turned driver named Tony (Viggo Mortensen), whose latest job is driving Dr. Don Shirley (Maherhsala Ali), an African American pianist.

The film follows the duo’s travels on the road for a concert tour through the south, resulting in the need for the Green Book. As they travel through the heavily segregated area of the American south in the 1960s, the two from a respect that leads to a friendship.

“Green Book” is fine. It’s just alright, and that’s really the problem. As a feel good movie, it can be an enjoyable enough experience, as an audience can probably leave with a smile on their face, but that’s about it.

This is such a complacent film and it never reaches for anything higher. From its straightforward story and plotting to the simplistically written characters, everything seems shallow. The plight of the people who had to use the Green Book, especially Don Shirley, is nearly sidelined at times because so much of the film appears to be through the eyes of Tony, who’s white.

It’s a clear example of a movie having its heart in the right place, but still missing the mark. The film wants to tackle the issue of racism, but does so with cookie-cutter storytelling and very little passion. The movie lacks the fire that films such as “BlacKkKlansman” and “The Hate U Give” from this year had. 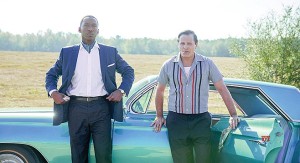 As previously stated, though, I didn’t find this to be a bad movie, but it’s commitment to tell this story in such an average way just makes the whole thing, well, average.

At the very least, though, one thing not average were the performances. Ali has won an Academy Award and Mortensen has two Oscar nominations. Both performers have top tier talent and it shows here, with each actor giving it all they have.

While the characteristics of the two are rather thin, with Don always being prim and proper while Tony is more rugged and willing to get his hands dirty, the actors portraying the two elevate the material. Not only do they share a strong chemistry, they also have the talent to portray some of the heavier subject matter in believable ways without coming across as over-dramatic or unconvincing .

What was puzzling, though, was the treatment of the side characters, more specifically, the assisting musicians who traveled with Don. These two, Oleg (Dimiter Marinov) and George (Mike Hatton), despite traveling with the two characters, are almost never on screen and the two actors have nothing really more to do than go “tsk, tsk” toward Tony’s uncultured ways.

In terms of how the whole thing looks, Farrelly and his crew deserve some credit. The set and costume design is all on point, with the era being recreated pretty well. The musical sequences are also fairly well put together, with the richness of the songs portrayed and the scenes expressing just how talented Shirley was. The cinematography, meanwhile, doesn’t stand out too much, but its’ serviceable.

“Green Book” is a film featuring some good moments of humor, great lead performances and can be enjoyed as a feel good picture to watch at a weekend matinee. However, from the dialogue to the story’s execution, the picture never truly elevates itself to being something great. 3.0 out of 5.

3 thoughts on “REVIEW: While its heart is in the right place, ‘Green Book’ is largely average”