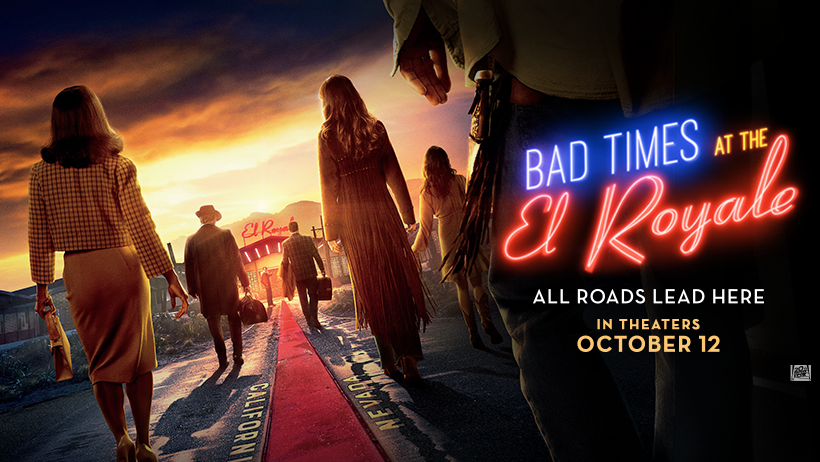 “Bad Times at the El Royale” is a film that juggles a lot of ideas, and some of them are good. However, director Drew Goddard and company weren’t able to bring everything together, and this feature suffers for it.

The picture takes place at a unique setting. The El Royale is a hotel located with two sections, one half is in California and the other is in Nevada. The film features a group of characters, including a priest named Daniel (Jeff Bridges), a singer named Darlene (Cynthia Erivo), a salesman by the name of Laramie (Jon Hamm) and a young woman who keeps to herself in Emily (Dakota Johnson), who all check into the El Royale on the same afternoon.

All of the characters, though, carry their own baggage and hidden motives. Additionally, the plot thickens when the mysterious, threatening man named Billy Lee (Chris Hemsworth) comes into the picture and arrives at the hotel.

“Bad Times” is a film that starts off well enough and builds some genuine intrigue. Yet the film loses steam as it goes on and by the end, it goes nowhere, finishing with very little to say.

It’s also noticeable that “El Royale” was very much made in the vein of a Quentin Tarantino picture, complete with sequences of the movie split into chapters. However, the movie isn’t as well paced as a Tarantino flick, and sorely lacks Tarantino’s signature writing and dialogue.

So much of the film features character interactions, yet nothing particularly interesting or engaging happens in these segments. Some are above average, but no real standouts. Many of these sequences end with a ‘that’s it?’ feel.

Credit can be given to a talented cast that provide some good performances. Bridges is reliable as ever, playing the grizzled priest character with charm and a slight aloofness. Erivo is also good here, playing the closest thing to an “every person” type of character this film has.

Hamm and Johnson do some solid work here, too. I do wish Hamm had more screentime, though.

Then there’s Hemsworth, as well as Lewis Pullman who plays the front desk clerk Miles Miller. Both actors have good moments, but unfortunately, the characters they play don’t lead to anything great, and it’s disappointing.

On another positive, it should be noted that the set design is rather nice here. As a period piece, the look is top tier, and the old 70s hotel aesthetic makes for a cool place to have this kind of story take place. Not a huge aspect of the movie, but it is featured in the title and gave the film some identity.

“Bad Times” isn’t actually bad, but it’s somewhat forgettable. The performers provide some good moments, the setting is cool and there are interesting scenes here and there. However, it simply feels like a convoluted puzzle with some nice pieces that was never put together. 2.25 out of 5.