I’ve been reviewing films for more than a decade now and during that time, I’ve seen plenty of films in the horror genre.

I can admit that not all of them have been particularly good. In fact, some have ended up on my top 10 worst of the year lists. However, some have stood out, and seeing that it is the month of spook and Halloween, I figured I could revisit some of the good flicks I’ve watched and make some recommendations.

First up is a foreign film that came out in my first year of reviewing. “Let the Right One In” isn’t a traditional horror movie. It has horror elements, especially vampire lore, but the filmmakers use this to tell a dramatic story.

The movie tells the story of Oskar (Kare Hedebrant) a boy who meets a young girl named Eli (Lina Leandersson). The two strike up a friendship, but Oskar soon learns that Eli is a vampire. The story unfolds in disturbing fashion, with frightening implications in where the characters are led. The movie also makes a point to tackle social issues, such as neglect.

The film is based on a book of the same name, which also received an American adaptation titled “Let Me In,” and that one holds up pretty well too. The 2008 version is the one you should definitely check out, though. It’s very well shot and the acting is on point from the two lead performers. However, it’s important to keep in mind that it’s not a standard horror movie and more of a drama.

This is one of the more underrated pictures I’ve seen in my decade of reviewing, so I’m happy to be talking about it. I remember in 2009 when I was going into see this one, and I was skeptical. However, I left quite pleasantly surprised.

To begin, I’ll admit this isn’t perfect. There are a few weak scenes, such as a poorly shot fight scene that seemed rather unnecessary in the third act. Plus it features a below average performance from Cam Gigandet.

Fortunately, the rest of the cast is solid for the most part, especially Dennis Quaid and Ben Foster. Where the movie really hits its stride, though, is the feeling of claustrophobia. Like other sci-fi movies taking place on a ship, such as “Alien,” “Pandorum” makes an audience feel like they’re trapped in a confined space, and unfortunately, there’s something dangerous on board.

While the film has some choppy editing, it also features some nice angles and fantastic colorized lighting, helping to set the mood immensely. It’s also noticeable that many of the effects were practical, rather than CGI.

Along with the horror, “Pandorum” is also greatly benefited from a mysterious story that unravels and takes some twists that I didn’t see coming in my first viewing. Truths get revealed and some shocking, well thought-out revelations are made as the film goes on. 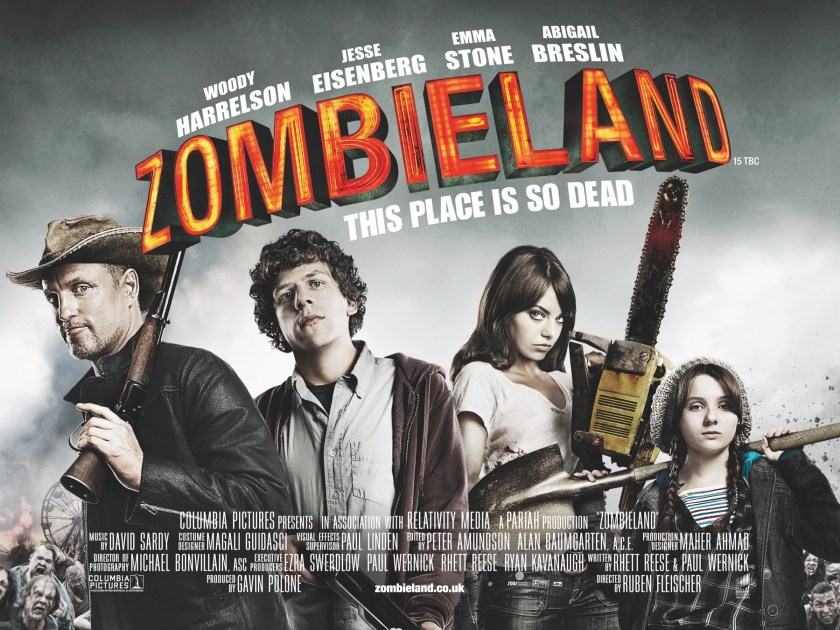 “Zombieland” is another flick that features horror elements, but isn’t exactly a horror movie. This one is an action comedy, and a damn effective one at that.

The film is smartly written, with a lot of references and witty takes on the horror genre, as well as zombie films themselves. Plus, it doesn’t shy away from adding the blood and gore to keep the horror theme going.

The movie also has a very talented cast including Jesse Eisenberg, Emma Stone and Abigail Breslin. However, the one who steals every scene in the movie is Woody Harrelson, who brings enormous amounts of energy to the screen.

While the movie is a comedy, Director Ruben Fleischer and crew still manage to establish some good character arcs that were properly developed. All four lead characters are fleshed out and none of them feel shallow. It could’ve just been a movie that pokes fun at the genre, but “Zombieland” does more and that’s why it holds up so well today.

This is a movie that was already rather divisive when it came out, and its reputation was hurt by a string of sequels that basically did the same trick over and over again. However, let’s strip away the franchise label on “Paranormal Activity.” Let’s simply look at it with its indie-film roots.

I remember seeing the original “Paranormal Activity” on an October night at the Fargo (N.D.) Theatre with a midnight release. The theater was absolutely packed and collectively, we were invested in every line of dialogue and every attempted scare.

One aspect of the film that works to its advantage is the shortening of days and extension of nights. At first, the scenes at night are relatively short, and the scenes during the day seem longer. The daytime is a sort of ‘sanctuary’ for the audience here, since most of the activity happens at night. However, as the film goes on, the daytime scenes become shorter and more infrequent while the nighttime sequences are expanded upon.

I think what helps make “Paranormal Activity” work is its usage of practical effects on a low budget. Even if a person dislikes this film, it should be acknowledged that the filmmakers put effort into subtle things like doors closing seemingly on their own or a Ouija board piece shifting around.

There’s a great creepy atmosphere set up here in this haunted house and the performers do good work expressing their fear.

I can remember going back to my dorm at Minnesota State University and being too creeped out to fall asleep. It had effectively made me fear what goes bump in the night, and I ended up having to listen to comedy podcasts.