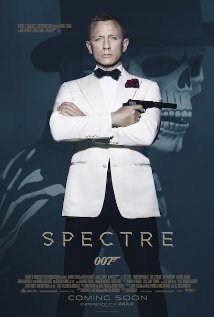 James Bond (Craig) is back and in “Spectre,” the latest in the 007 franchise, and is investigating a lead from the former M played by Judi Dench who was killed in the last film.

M’s message, recorded before her death, brings Bond in contact with an evil organization headed by a sinister villain played by Christoph Waltz. At the same time, Bond has to deal with a new intelligence program which threatens the future of the 00 agency.

I was one of the few that wasn’t a huge fan of “Skyfall.” While it was well directed and had some gorgeous cinematography, I felt it was a bit too serious, the Bond backstory was too heavy and the villain plot reminded me too much of “The Dark Knight.”

So for me, “Spectre” was a real treat because it went back to the Bond basics. There is a variety of action scenes, a cool henchman, some suave moments and plenty of charming humor.

The movie is more than two hours long, but it keeps things interesting by including a story that features the new age of surveillance and intelligence as well as a more classic villain taking over the world plot.

From a story stand point, the only weakness in “Spectre” is a reveal in the third act which came across as a bit too far fetched. The rest of the film works just fine for a spy adventure, but the movie’s twist detracts a bit because of how coincidental it is.

It’s possible that “Spectre” could be Craig’s final Bond film, which would end a great era for the franchise in terms of leading actors. Craig has been solid in each of his Bond films, bringing something a bit more modern to the role and “Spectre” is no exception.

When it comes to this round’s Bond girl, Lea Seydoux played the role really well and her character was written with a good amount of depth. The backstory was interesting and Seydoux had a convincing chemistry with Craig.

The previously mentioned twist which was a bit of a drag on the movie had to do with Waltz’s character, which in turn brought the role down somewhat. That said, Waltz, the two-time Oscar winner, has mastered playing villains and he brings his A game to this edition of Bond.

The action in the movie was a lot of fun, with a couple standing out. One of them was a car chase that included some great comedy and the other was a fist fight on a train which provided edge-of-your-seat excitement.

“Spectre” is one of the better Bonds in a while and is a good finale if this in fact the end of Craig’s time as the super spy. 4 out of 5.