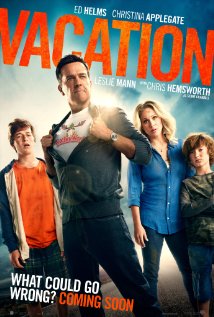 “Vacation” is the sequel to the 1983 film of the same name which follows the character Rusty Griswold. Rusty is the son of Clark Griswold and was part of the many family adventures of the original “Vacation” series and wants to recapture some of that magic with his own family.

To do so, Rusty (Helms) decides to take his family on a road trip to the giant theme park Wally World, with multiple stops at landmarks along the way.

What made the original “Vacation” work well, as well as its most brilliant sequel “Christmas Vacation,” was that the family was pretty basic and they just happened to get into mishaps and simple mistakes. Some of them were pretty silly, but it still felt somewhat relatable.

This time around, nothing feels relatable because everything has been exaggerated to a ridiculous level. For example, the car used in the original was goofy looking and had features that were unfamiliar. So this time around, the car is taken to such a level that it comes off as cartoonish and not even close to being realistic.

That more or less is how the rest of the movie goes. Every stop that is made by the family is usually an attempt at gross out humor without many moments of satire.

The worst part of the film by far are the characters, and it starts with how Rusty was written and portrayed by Helms. In all of the original films, Rusty (as well as his sister Audrey) were average kids but added to the film by making clever quips or pointing out certain mistakes that Clark would be making.

That’s not the case in the 2015 version. Rusty has become a complete bumbling idiot, surpassing anything that even Clark did. It could have worked really well had the character actually been more clever and somewhat self aware. It’s what much better comedies, such as “21 Jump Street” and “We’re the Millers” have done, resulting in better films.

The rest of the cast doesn’t help much either as the characters are written just as dull as Helms’ Rusty is. It did seem like Christina Applegate was going to have a fun moment at a sorority house at her old college campus, but then she just vomits, because vomiting is funny. And she keeps vomiting… because the writers think vomiting is still funny.

I mentioned earlier that the kids in the original, like Rusty, were just that, kids. They were made to be relatable but were still able to deliver good humor from their commentary on what was going on.

There’s also James Griswold, played by Skyler Gisondo. The humor behind his character is that he’s socially awkward and he gets bullied by his younger brother. It’s (not) funny because younger brothers don’t usually tease their older brothers, get it?

One single scene where Charlie Day plays a water rafting instructor provided a couple solid laughs. That’s about it. Making a new “Vacation” film wasn’t bad in theory, and probably could have worked. The problem is that they more or less took the original movie and just tried punching up the script with more vulgarity and swearing, without updating the satire or wit. 1 out of 5.