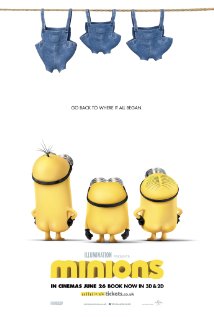 “Minions” is a prequel to the “Despicable Me” movies showcasing the origin story of the villain helpers as they travel the globe in search of a leader.

Their adventure takes them to various points through history, but without much luck. Eventually, three of the minions, Stuart, Kevin and Bob decide to go on a new journey to save their race by finding a great villain to follow. Their quest takes them to the mighty Scarlet Overkill (Bullock), however, even when they start working for her, things might not be as good as it seems.

The lovable Minions work fine as side characters for the main leads in the “Despicable” series to banter with and play off of. Them having a full length feature film, though, doesn’t quite function as well.

The story in “Minions” is paper thin and it was easy to tell that it was being stretched as far as it could go to hit an hour and 30 minutes. The result was an experience that had some funny moments, but didn’t really have anything more to offer. Sure, this is a kids animated adventure, but so were the “Despicable” movies and those had the great father/daughter element which gave the whole thing some heart.

“Minions” simply doesn’t offer any substance. The three lead characters just sort of go from place to place, a visual gag or joke is brought up, they talk funny, then it’s on to the next scene.

A disappointing aspect of the film was the voice acting, especially Bullock’s performance which was unmemorable. The character she plays, Overkill, was bland and didn’t have any quirks or charisma the way Gru from the original films did. It showed in Bullock’s performance, which felt dull.

The animation is in the same style as the “Despicable” movie which means all of the characters have unique and over-the-top designs, which is definitely a positive with this franchise that focuses on goofy comedy. The 3D aspect of the film was rather unnecessary, though.

At the very least, the movie was still funny. It’s hard not to laugh at the antics of the Minions as they continually screw things up and giggle at everything like the world is a big joke. Even if the rest of the film is flawed, the humor is still there.

“Minions” certainly isn’t perfect and seems like a project that could have worked better as a half hour to an hour long special on TV rather than a theatrically released movie. There simply isn’t much in terms of character or story to make for an animated film that rises above the rest. The comedy aspect of the villain helpers is entertaining, though. 2 out of 5.