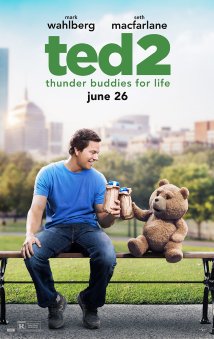 In the sequel to 2012’s film “Ted,” the titular named bear (MacFarlane) that magically came to life is now (somewhat) happily married and continues spending time with his best friend John (Wahlberg). Problems arise, though, when Ted and his wife try to adopt a child.

Ted soon learns that the government doesn’t recognize the stuffed animal as an actual person and it throws his whole life in jeopardy. In response, Ted and John hire Samantha (Seyfried), a lawyer to fight for the toy’s civil rights.

MacFarlane is the type of comedian where all sorts of jokes are thrown at the wall with the hope that something sticks. In his first two feature film outings, “Ted” and “A Million Ways to Die in the West,” this strategy resulted in some jokes hitting and others missing making both movies come off as funny, but overall average experiences.

“Ted 2” falls into that same category. Once again, the story is largely nonsensical. For whatever reason, the stuffed bear Ted can speak and this time him and John are trying to prove that the toy animal is a person in the eyes of the law. Like the first movie, while “Ted 2” has its moments, the picture does run a little bit too long and certainly could have had some things cut.

With that said, though, “Ted 2” is probably strongest of MacFarlane’s three features so far. The film moves at a quick pace and there were plenty of solid jokes and references throughout.

One of the better additions in “Ted 2” was Seyfried who delivered some strong comedic moments and had good interactions with the two main protagonists of the film. In fact, Seyfried fit in better with MacFarlane’s brand of comedy than Mila Kunis in the original.

Regarding the two lead characters, Wahlberg and MacFarlane once again return the timing and humorous chemistry that the first film featured.

The main issue with the two main characters, though, is that both Ted and John are fools who screw up. The dynamic of Peter and Brian in MacFarlane’s most successful franchise “Family Guy” works much better since there is the more foolish of the two, Peter, and the smart one, Brian to create a bit of a balance. The duo in “Ted” seems a bit lacking in comparison.

The flaws with the two characters and the film’s long runtime do drag this comedy down a bit. However, people walking into “Ted 2” should know what they’re seeing. The references, raunchy humor and cameos, which are all staples of MacFarlane’s type of comedy and story-telling is all on display here.

MacFarlane fans and those seeking a simple comedy with less structure than a typical humor film will be able to get some enjoyment out of this sequel, but those wanting a bit more from their satirical entertainment can skip it. 2.75 out of 5.