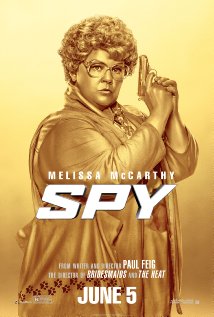 Melissa McCarthy plays Susan in “Spy,” a CIA mission analyst who has remained at the agency’s headquarters for most of her career. From her desk, Susan monitors other agents, mainly an operative named Bradley (Law) to keep a watch for potential threats.

Susan’s whole world begins to shift, though, when Bradley is killed in the line of duty by an arms dealer named Rayna (Byrne). On top of losing a great agent, the CIA learns that Rayna has uncovered the identities of other operatives. In order to bring her down, Susan steps up to take on a field mission for the first time.

What a difference a year makes. “Spy” is a massive step up for McCarthy from last year’s film “Tammy.” While the trailers had the film looking a bit average, “Spy” turned out to be a solid comedy, and McCarthy is one of the reasons it works as well as it does.

The film opens up right away with an agent making a dumb, fatal, mistake out on the field and it sets the tone for what kind of movie this will be. From beginning to end, the film has raunchy comedy, witty lines and a good amount of satire on the spy genre itself. It all comes together for a humorous time that is a lot of fun to watch.

The one major gripe with the film is its run time. The movie is a full two hours long and it didn’t really need to be. There came a point in the last half hour where it felt like the movie could have already been over. If, maybe, 15 or 20 minutes were cut from the movie, it would have been an improvement.

As previously stated, McCarthy really delivers in this movie. Her character is well written, being smart and confident while still having flaws, and McCarthy sells it.

From the viscous dialogue she has in her back-and-forth scenes with the supporting cast to her complaints about getting the short end of the stick on her undercover aliases, all of it is funny and makes the movie a real joy to watch.

It helped that McCarthy was helped by a solid supporting cast, too. For example, Jason Statham is hilarious in every scene he’s in, playing the overachieving tough agent who may or may not be telling the truth when describing his exploits on the field.

Byrne was also fantastic in “Spy,” and the best part of her performance came from seeing her character argue with McCarthy’s and watching the whole thing escalate.

The best part of “Spy” was how it handled its comedy, though. The more physical comedy, coming mainly from the fight scenes, was creative, over-the-top and just plain funny. They were reminiscent of the fight scenes in “Pineapple Express,” another movie that had combat which was a bit unorthodox. The film also had plenty of good one liners and fun banter which delivered laughs.

There’s no doubt, “Spy” was too long for a comedy. That being said, it did what it is supposed to do, make the audience laugh. McCarthy, Statham and the rest of the cast make for an enjoyable, entertaining and funny experience at the theater. Low 4 out of 5.