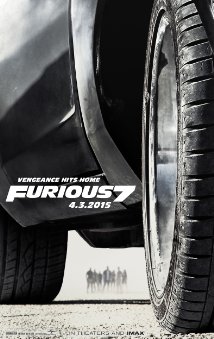 The fights, the roaring of the engines, the one-liners, the girls. “Furious 7” delivers on everything.

The seventh installment starts not long after the previous film. The whole crew is living peaceful lives and things appear to be going well. That is until Deckard Shaw, played by Jason Statham, starts coming after the protagonists. The reason for his attacks, Shaw is the older brother of the villain from part six.

After Shaw takes out one of the members of the crew, Dominic Toretto, played by Vin Diesel, decides to retaliate.

“Furious 7” wastes absolutely no time getting the ball rolling. This is a movie that hits the ground running and hardly slows down for a moment. The first scene in the movie shows how dangerous Statham’s character is and by the 30-minute mark, all of the characters are into mission mode.

The fast pace is perfect for the film and so is the fact that the picture doesn’t take itself too seriously. The film makers were self aware in making the movie and know how over the top it is. So, they decided to just have fun with everything and that fun transcends to the audience. The whole thing ends up being a great joy ride.

The whole cast, with the exception of Statham, have been around for a few films so they know their roles. There’s nothing particularly award worthy in the acting, but the performers have good chemistry with each other and keep things exciting, with a lot of good banter.

In regards to Statham, though, the newcomer delivers. He didn’t have as many scenes as I expected, but when he is on screen, he’s great. Another fantastic addition to the cast was Kurt Russell ,who plays a secret agent who helps the main protagonists. Russell hams it up a bit in many of his scenes and it actually works well with the rest of the movie.

There were some forgettable new characters, though. For example, a hacker named Ramsey, played by Nathalie Emmanuel, didn’t seem to have a lot charisma on screen and she always seemed to take a back seat to the main cast. Another new forgettable character was Djimon Honsou as Jakande. Jakande was actually the main villain of the film, but he came off as completely generic.

The action in the film is absolutely stunning with all kinds of crazy moments, from cars parachuting out the back of a cargo plane to cars jumping through buildings. The vehicular mayhem in the movie just takes the entire film series to another level and makes for an exciting picture.

The only flaw with the action is that during the fight scenes, there was too much editing. Every time a punch or kick was thrown, there seemed to be an edit and the camera would shift to a different angle. I would have preferred for the fights to have less edits.

The flaws in the movie are all minor. This is a fantastic popcorn flick and is a blast to watch on the big screen. The movie has fun action, great one liners, the actors have fun with their lines and there is never a dull moment. The movie also handles the passing of actor Paul Walker very well. 4.0 out of 5.