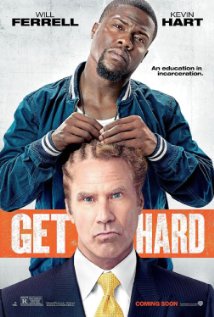 In “Get Hard” Will Ferrell plays James, a rich business man who seems to have a perfect life for himself. This changes suddenly when he is charged with a white collar crime and has to go to prison.

In the process, James mistakes Kevin Hart’s character Darnell as a man who went to prison and hires him to teach him how to survive in the slammer. Despite never having been to prison, Darnell agrees and decides to teach James how to stand up for himself.

If you’re looking for an unpredictable comedy where you have no idea where the next joke is going to come from, “Get Hard” probably isn’t for you. The film, from beginning to end, is entirely predictable, both in terms of story and its jokes. It’s easy to figure out who the villain is, it’s easy to tell what’s going to happen and the humor is never a surprise.

Looking at the comedy further, a majority of the jokes and gags fall into two categories. The first is prison rape/gay jokes and the second is racial stereotypes. These two types of jokes dominate the entire film, and unfortunately the writing in the movie is very hit or miss, and not in a good way. For every gag in the movie that is actually somewhat funny, there are three more that aren’t.

Will Ferrell plays the lead role similar to his other films. He’s more or less the same as some of the other foolish characters he’s played in the past, except this time he happens to be rich. Fortunately, Ferrell is at least a good comedic actor and makes some of the material work OK. He also has good chemistry with Hart.

Speaking of Hart, he is really likable in this film. In other movies, such as “Think Like a Man” and “Ride Along,” Hart was really loud and started to get annoying. Not the case here, Hart is much more toned down in this movie and it works.

The supporting cast is forgettable, though. Craig T. Nelson doesn’t offer much as James’ boss, for example.

“Get Hard” is a forgettable comedy that doesn’t provide a lot of big laughs. Some of the material is funny, but for the most part, one can skip this flick. 2 out of 5.