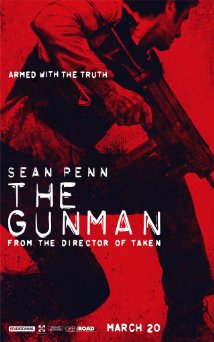 In “The Gunman,” Sean Penn plays Terrier, a mercenary for hire who is nearing the completion of a current mission. After Terrier completes said mission, he decides to retire and leave his current business behind him. Eight years later, though, it appears that the sins of his past have come back to haunt him as he becomes the target of an assassination.

Now Terrier is on the run and has to try and figure out just why someone wants him dead.

One would figure that “The Gunman” would be an exhilarating feature, as most ‘men on the run’ type stories are. Yet, the film turned out to be entirely dull and the entire runtime it felt as though the movie was plodding along.

One reason for this slow feel to the movie is that there aren’t enough times that Penn’s character seems to be in danger. While he is targeted in a few attacks, they are surprisingly few and far in between. The movie instead puts too much focus on a rather lazy romantic subplot that didn’t seem necessary in this story of a man on the run.

What’s worse is that this rather forgettable romantic drama is given more attention than the relationships between the characters who were actually part of the mission.

The biggest problem, though is that the film couldn’t seem to find a good balance with its tone. The slow moving plot works better for an espionage thriller/drama while the little action that does show up, which gets over the top at some points, fits better in a standard shoot em up movie. The film tried doing a little bit of both and it didn’t work.

As for the actors, the film wastes two of the biggest names on the poster. Both Idris Elba and Javier Bardem are both talented actors, yet they are really not given enough to do here. Elba has hardly any screen time and Bardem’s character is straight up cartoonish at points and doesn’t get enough of a background to his character. I couldn’t take Bardem’s character seriously and it made the movie much less compelling.

Academy Award winner Penn is alright in the lead role of Terrier. As a talented actor, Penn certainly gives the character at least a likable personality, however, he is rather limited by the script. Terrier just simply isn’t that interesting of a character, he had hardly any personality and for most of the film was just dull.

The film also seemed to waste a plot point of Terrier having a case of severe head trauma. This could have been an interesting point, yet it only showed up in the film toward the end, and even when it did show up, it acted more like bad headache for Terrier.

It could have been much more interesting if his brain problems led to some sort of memory loss which he would have to overcome. This type of situation was actually done very well in the 2007 movie “The Lookout” with Joseph Gordon-Levitt.

Unfortunately, “The Gunman” didn’t really know what to do with the idea.

Jasmine Trinca as Annie had no real character at all. She was more or less reduced to a simple damsel in distress for about 80 percent of the flick and offered nothing more than to be the love interest.

“The Gunman” doesn’t particularly do anything well. It wastes some nice acting talent, the script isn’t anything special, it’s romance is uninteresting and the villain’s plot is completely cliche.

At its core, the movie suffers most because of its inability to be an exciting picture. There were no moments where I was on the edge of my seat and all of the combat had a ‘been there, done that’ feel to them. 1 out of 5.