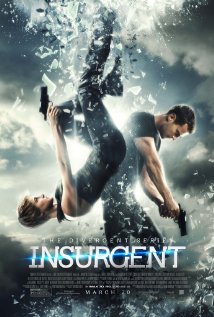 I certainly wasn’t expecting the second movie in the “Divergent” series to be a chore to sit through, but it was.

In the sequel to last year’s mediocre “Divergent,” “Insurgent” picks up not long after the first film ended. Tris, played by Shailene Woodley, and Four, played by Theo James, are on the run from the main factions of the city and are seeking out any kind of shelter.

Unfortunately, they have to stay on the run through many parts of the film. This problem increases when Jeanine, played by Kate Winslet, decides to search for Tris as she may be the one who can unlock secrets of the city.

“Insurgent” suffers from many things, one of which is its plot. Instead of flowing with a traditional three-act structure, the movie feels more like a video game. Level 1, survive the peaceful village. Level 2, get on the train, etc.

On top of that, the movie is far too convoluted. The film tries to add too many different plot lines to make things more interesting. However, the problem is there is no depth to these points. The movie introduces relationships with new or returning characters, yet makes no attempt to explore these relationships.

Besides not exploring the relationships of these characters, the movie also skips over an opportunity to make points of social commentary or morality.

What we’re left with is a flick with a lot of things happening, but no real depth behind it. This makes the film much less compelling.

In terms of acting, the best highlight of the movie and maybe the only thing that the movie can get praise for, is Woodley’s performance. There are quite a few scenes where Woodley has to show a real flare in her character and it works. She is a talented actress and is able to make Tris at least likable and sympathetic.

The same can not be said about Academy Award winner Winslet, though. Unlike President Snow played by Donald Sutherland in “The Hunger Games,” Winslet’s character Jeanine has no menacing charm. Being the villain, one would hope she could at least have some fun with the role or bring some level of energy to make it more interesting. Instead, all Winslet does through the film is use the same stoic facial expression and tone.

The same can be said about James, who is a rather dull co-protagonist with little to no personality. Along with his boring character, James has practically zero chemistry with Woodley on screen and it makes the whole romance seem very forced.

The entire time both Winslet and James were on screen, I was asking myself, “Where’s the passion?” “Where’s the emotion?” “Show something humanistic!”
It’s not entirely the cast’s fault, though, since the dialogue is more or less putrid from beginning to end and offers no real substance. The only person who has any good lines and delivers them well is Miles Teller as Peter. However, Teller’s screen time is limited and the character seems underused.

Because of the boring story and characters, it makes it difficult to care about any of the on-screen action. Sure, there’s some spectacle to see with special effects, but that doesn’t hide the film’s flaws.

“Insurgent” has almost nothing to offer. It’s not the worst movie I’ve seen, but it committed a cardinal sin of film: It wasted my time. 1 out of 5.