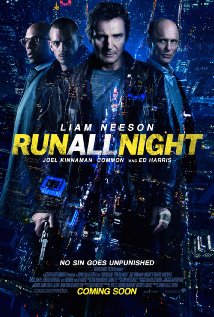 “Run All Night” follows former mob hit man Jimmy (Neeson) who doesn’t exactly have the best luck in life. Jimmy is an alcoholic, poor and is estranged from his own son. The only person in the world who even gives him the time of day is his former boss and friend Shawn (Harris).

Problems increase for Jimmy, though when Shawn’s son gets involved in some bad crime and ends up killing another drug dealer. Jimmy’s son Mike ends up seeing the killing while on duty as a limo driver. This sets in motion a plot where Mike is on the run from Shawn’s cronies and needs the help of his father if he has any hopes of surviving.

At first glance, “Run All Night” appeared to be another action flick in the Liam Neeson genre which has been going on since “Taken” was released. However, while this film does have its share of action moments, the movie also succeeds at being a gritty, urban crime thriller with plenty of suspense.

There are depths that the story goes into which are a welcome change of pace and they help give a more compelling edge to the action scenes. The movie explores the relationship between Jimmy and his son as well as the honor code that Jimmy and Shawn had growing up.

The characters are written well, too. All of the motives are fleshed out and none of the lead characters come off as being too cliche. For example, Shawn could have easily been a classic crime boss, however, he was written to actually be sympathetic in some parts and really understandable. The movie shows that he has regrets in life and that he probably wishes some things were different.

The same can be said for Neeson’s character Jimmy. He has a past that he can’t escape from and its evident from both Neeson’s portrayal and the way the character was written that it has taken a toll on him both physically and mentally.
The younger actors did well in the film, too. Especially Joel Kinnaman. His portrayal of Mike, who was a hardworking family man who wasn’t perfect but was trying to get through life, was honest and believable.

Even some of the more cliche minor characters were pretty good. For example, there was a fairly standard detective character who was played pretty well by Vincent D’Onofrio.

The only weak character in the film was a hit man named Andrew played by Common. Andrew is more or less an unstoppable killing machine and at certain points felt a bit out of place in a film that had done a good job at setting up its other characters.

The action was exciting, though, and it earns the R rating with some gritty moments.

“Run All Night” could have been a much more average movie but it was thankfully picked up by some good performances and competent writing. It’s nothing award worthy and not an instant classic, but its definitely worth a matinee watch. High 3 out of 5.