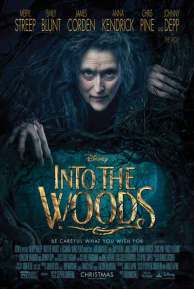 Based on a Broadway musical of the same name, “Into the Woods” is a crossover of sorts which features characters from the stories of Cinderella (Kendrick), Jack (Huttlestone) and the Beanstalk, Little Red Riding Hood (Crawford) and Repunzel (Mackenzie Mauzy). The stories are all brought together by a couple, the Baker (Corden) and the Baker’s Wife (Blunt), who are trying to lift a curse that was set on them by the local Witch (Streep).

To do so, the couple needs to collect items from all of the famous fairy tales. The film tells the story from multiple angles and much of the plot is told through song.

The premise for “Into the Woods” sounded fine. Crossover some major fairy tale characters into one unified story and throw in some songs from Broadway to make things more fun. Swift disappointment came crashing down, though, as the film’s story and music never came to a point of being engaging.

While having classic tales like Cinderella and Jack and the Giant Beanstalk, the film doesn’t do anything exciting with them. For example, the movie doesn’t have any scenes with Cinderella at the ball and doesn’t show any of Jack’s adventures in the land of the giants.

The plot involving the Baker and his wife wasn’t compelling, either. Sure, the relationship between the two was sweet, and as an audience, one would want them to succeed, yet their story through most of the movie is a scavenger hunt of items to reverse the curse and hijinx ensue.

Another problem in terms of the movie’s story telling was its pacing. There is a point in the film where everything seems to be headed to a conclusion, and it seems like all of the plots are getting good resolutions. Then it turns out that the movie isn’t over and it actually has about 30 minutes to go. The problem with this development is that the movie has no more momentum and the rest of the film just seems to drag on and on.

On top of that, the film doesn’t even properly wrap up all of the subplots properly and other subplots are merely glossed over far too quickly. Even one of the main antagonists of the film randomly leave the entire story toward the end with no explanation as to why or what the plan behind it is.

Also disappointing was the music. I have no problems with musicals, but the music in this film just seemed repetitive with everything sounding the same.

Unlike the fantastic 2012 film Les Miserables, which had soaring, energetic, moving and powerful songs from both individuals and groups, this movie had nothing. There was never a song that hit me to my core with its power.

It’s too bad that this is how the movie turned out, because what the movie was trying to accomplish was clear. A more adult, realistic and honest approach to fairy tales. The problem is that it was hard to take seriously. There are too many parts that come off as too satirical with no political or dramatic moments to back them up, like “The Avengers” had, for example.

One highlight of the movie, at least, was the cast. All of the crew members really sell their performances, from the more experienced actors like Anna Kendrick and Meryl Streep, to the younger ones like Lilla Crawford and Daniel Huttlestone.

Despite not having as much to do as I would have personally liked, there’s no denying that all of the performers poured a lot of effort and produced good work.

Well, almost everybody. There were a few casting choices that just seemed random and didn’t add much to the film. The first is Johnny Depp, who only seemed to be cast to add another big name to the picture since his character has just a few small scenes. The other was Chris Pine, who just seemed dry and out of place in the role of the prince from Cinderella’s tale.

Another positive point regarding the film was the details with creating the settings. The woods themselves did in fact look good, and they seemed to have different areas of the woods which kept what was on screen feel fresh. Personally, I would have liked to have seen some other locations, the previously mentioned ball from Cinderella, for example, however, for the most part, the setting work. The same can be said for the phenomenal makeup and costume designs.

“Into the Woods” unfortunately felt like one giant chore to sit through. The music in this musical didn’t have any power and the story was never gripping and by the end I was begging for it to be over. I would give it a 1 if not for the somewhat strong performances from the cast and the attention to detail with the setting, costumes and makeup. It’s barely a 2 out of 5.