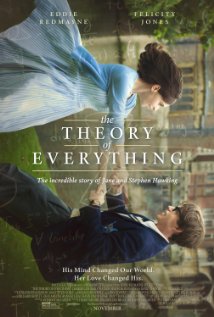 The life and relationship of world famous physicist Stephen Hawking is explored in “The Theory of Everything.”

The film begins with Hawking during his education career and follows through the discovery of his illness and eventually his well known life’s work.

Walking into this movie, the hope was that it would explore the genius of Stephen Hawking and maybe his research that supported one of his books. Unfortunately, it played out more as a standard biopic than anything. Not that biopics are bad, often times they can show what happened in a figure’s life and that was true with “The Theory of Everything.”

The problem is that, like most biopics, “Theory” eventually feels like simply a highlight reel of a person’s life. It was no doubt interesting seeing the development of Hawking’s illness and how he overcame it to continue his work.

The story of the relationship between him and his wife was also touching. The movie never has anything deeper to offer, though and it leads to a rather bland experience.

I think a better way to have done a film like this would have been more in the vein of 2012’s “Lincoln.” That movie only showcases a small, but important section of President Lincoln’s life. It displays Lincoln’s political brilliance and also who he was as a person. If “Theory” could have worked if it had been more focused and more direct.

The performances from both main leads did work nicely in the film, though.

Eddie Redmayne’s portrayal of Hawking in regards to both the relationships and the illness are both commendable. It’s apparent that Redmayne did his research for the role, as his movements and mannerisms had to have been inspired by studying the real life figure.

Felicity Jones was also solid in the picture. The showing of emotion she gives in her performance made for some compelling moments. The mental strain her character has the condition of Hawking worsens is on full display thanks to the strong portrayal.

Another issue with the movie arises, though, because of the technical aspects.

The movie could have also used some narration or a voice over for Hawking. It could have been an insight into not only what Hawking is thinking, but also a way to explore his brilliance.

Overall, “Theory” is simply a standard biopic about a monumental figure. The performances are good and the story is interesting enough to justify a low 3 out of 5 rating, but nothing beyond that as the film is just so average.