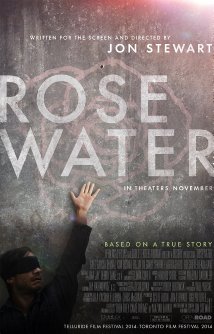 Based on true story, “Rosewater” follows the story of Newsweek magazine journalist Maziar Bahari (Garcia Bernal) as he goes on location in Iran to report on the 2009 election.

While covering the election, Bahari captures footage of riots after the reelection of Mahmoud Ahmadinejad and is spotted doing so by security cameras. Because of this, Bahari is arrested and held in prison for over 100 days, having to endure constant interrogation and psychological torture.

As a first time director, “Daily Show” host and comedian Jon Stewart does a very good job. The film has good technical aspects with solid camera work and editing and Stewart seems to have his own style.

“Rosewater” isn’t without its flaws, though, which are most apparent in how the story is told. First of all, the pacing of Bahari’s story seems off, with some points moving too quickly and others seeming to meander on. The movie for example seems to have too big of a set up before Bahari gets imprisoned, and once there, some of the parts move too fast.

Another issue is that while the situation Bahari was in seemed desperate, it never felt severely tense. There was always the sense of knowing that Bahari was going to get out of prison without having much suspension along the way.

It’s not to say that the movie isn’t engaging to watch at any points. The whole film covers its subject matter in an honest, real and intelligent way to hold an audience’s interest.

Just as a learning experience about the situation that Bahari went through and what it was like during the election was quite captivating. The issue is that while the film showcased a very serious and important subject matter, it didn’t feel as though it explored it that deeply.

The acting does help the movie, too, mainly thanks to the two lead performers. Garcia Bernal is very good as Bahari in that he can make the audience empathize and relate what he’s going through with the audience and also carry a satirical side when the film called for it.

The other good performance came from Kim Bodnia as the man who interrogated Bahari. Bodnia gives an intriguing performance as the interrogator, being both a menacing antagonist but showing that the character truly has bought into false information about Bahari being a spy.

Despite its flaws, “Rosewater” is still adequate filmmaking. Interesting subject matter, solid acting and strong technical aspects made for a nice picture. It just could have been deeper and better. Low 4 out of 5. I’m looking forward to what Stewart does if he decides to sit in the director’s chair again.