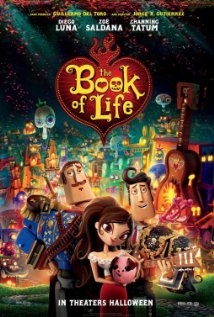 “The Book of Life” follows three central characters, Manolo (Luna), Maria (Saldana) and Joaquin (Tatum). The three are childhood friends, however, circumstances separate them over time. That doesn’t stop young love to develop, though, as Manolo and Joaquin both have a crush on Maria.

The majority of the story takes place with the three main characters as adults, with Manolo as a bull fighter who wants to become a musician, Maria, taking her place as the daughter of the city ruler and Joaquin as a great warrior.

I should start off my look at the story with mentioning that the above plot synopsis actually left an element out. There’s actually a third point to the whole movie. The flick starts out with a class of children visiting a museum and the tour guide telling a story, which leads to the narration.

There’s nothing wrong with this formula, but it should at least mean something.

There was no point to having this type of narration since there’s nothing to connect those characters from the tour with the characters from the story being told. If there were kids that paralleled what was going on in the story, it might make sense, but they don’t. It just seemed random.

The story about the three main characters had some good things going for it. For example, it incorporates multiple cultural myths which give it a unique edge. The only problem is that the story also involves many cliches. The core conflict of the flick is basically a love triangle, and outside of that there is just the threat of a generic villain.

The three main characters seem really generic. Manolo is the classic starry eyed dreamer who wants something different, Joaquin is more or less the standard jock and Maria comes off as the warrior princess who can stand up for herself.

These characters can be fine if executed well, but this movie didn’t really have great dialogue to back up them up. Additionally, some of the voice choices seemed kind of odd. Despite being a Mexican character, the director decided to cast Tatum as Joaquin. It’s not that Tatum did a bad job necessarily, it just didn’t really fit.

Another problem I saw with “The Book of Life” was that, despite being a very culturally influenced movie, I feel that the experience was cheapened by the addition of modern era material. For example, Manolo is a musician, however, the only songs he plays are modern day songs that have been given a bit of a remix. Instead of coming up with original music for this flick, they just used music that already existed and it took me out of the experience.

The jokes and some of the characters go along with this flaw. For example, there was just some humor that was out of place, like when the character Joaquin says the line “come at me bro.” I couldn’t help but roll my eyes. There’s also the character the Candle Maker played by Ice Cube, who was the lamest attempt at having a “hip” character that I’ve seen in a while.

It’s not as if I’m against all the modern humor, stuff, either. I think there have been plenty of Disney and Dreamworks features that have found a good balance. “Frozen,” and “How to Train Your Dragon” are some recent, good cases. “The Book of Life” just took it a bit too far.

The animation was at least good too look at. It’s always great seeing a different, fresh and unique take on animation and this movie delivered on that, having some good ideas with design and a lot of vibrant colors.

Overall, “The Book of Life” has some good concepts, and the animation is really well done. However, the story and characters have quite a few flaws and it brings the movie down. 2 out of 5.