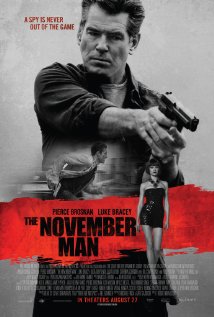 He may not be James Bond anymore, but Pierce Brosnan is the best part of this spy action thriller.

“The November Man” follows a character by the name of Peter Devereaux, played by Brosnan, an ex CIA agent who is called in for a special mission. Things take a deadly turn when Devereaux finds out he will be squaring off against Mason, played by Luke Bracey, who is an agent he trained.

As the plot thickens, Devereaux learns his espionage mission has more sides to it than he originally thought and the amount of enemies in his way grows larger.

Brosnan’s latest adventure into the spy universe of movies starts off well enough, however, as things move along it gets more and more convoluted. It’s as if the screenwriter was trying to put in additional story elements to make twists, but they just don’t make the movie more interesting.

In theory, “November Man” should work. Having an experienced ex-agent come out of retirement and face off against his replacement sounds good enough. But the movie shoves in so many other sub plots the story becomes clunky and disjointed. By the middle, it was dragging itself to the finish line. What’s worse is there’s not a whole lot of style or substance in the movie either. It uses plenty of spy clichés and does nothing fresh with them resulting in a dry and boring story.

Brosnan is the best part of the movie, as he brings the material to about as high a point as it can go. The script didn’t allow him to bring all of his charm he had in the “Bond” franchise, but he still elevates the material and plays the aged special operations character quite well.

Where the movie falls to pieces is Bracey. He didn’t have any chemistry with Brosnan to make it feel believable that they had a mentor-student relationship.

Bracey’s performance was also stiff and he didn’t provide any of the charisma needed for the role. The character Mason should have been as good as the lead since he is such a major aspect, but unfortunately, that isn’t the case.

I wish I could at least say the action was fantastic, but I would be lying. It comes off as rather average. Exciting, but still average. Sure, it’s not bad for a Saturday matinee, but it carries no weight or suspense.

There have been a few movies lately that have captured the life of aging agents and spies. “The American,” with George Clooney, “Taken,” with Liam Neeson and just this year with “3 Days to Kill,” with Kevin Costner. Each of these films has one thing in common, it has more to offer than “The November Man.”

Amazingly, studios have already green lit a sequel to it, so even if “The November Man” tanks at the box office, audiences will apparently get a “November Man 2.”

Maybe they can get it right next time. As for this film, it’s dull, dry and besides Brosnan and a few action pieces, is completely forgettable. 2 out of 5.