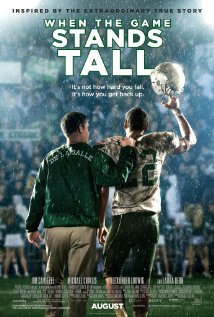 The film follows Bob Ladouceur (Caviezel), a coach of a high school football team which achieved the longest win streak in football at any level. The movie begins with business as usual for the team. They win another state championship and everything seems to be going fine.

In the offseason, though, tragedy strikes on more than one occasion. Ladouceur gets a heart attack from pushing himself so hard and one of the teammates set to graduate and go on to the University of Oregon football program is shot and killed. To make matters worse, at the beginning of the next season, the team loses… TWICE!

This movie tries so hard to play up the terrible football game loss that happens to the point where it comes across as worse than a major health problem with the coach and the death of a former teammate. This in turn leads to a greater problem with the picture.

The drama is played up so much when there isn’t all that much drama to be had. A story about this legendary team isn’t a bad idea, but the execution is off.

The success of the team was never really in doubt. The football player who died, which was a tragedy, already had graduated and had little impact on how the new season (and more specifically the rest of the movie) would go. Additionally, the coach makes a good recovery health-wise and all of his assistants are still in place.

It’s apparent right away that the keys to having continued success are right there in front of them, and not in constant doubt like in “Friday Night Lights” when the star of the team is injured or in “Remember the Titans” where the team had to overcome racial issues.

This leads to a lack of tension or suspense as it is almost a certainty that the team will win. The movie tries hard to portray them as underdogs, but it just doesn’t work.

On top of that, the movie has really poor pacing. At the beginning we are following one season, then there’s the offseason where a ton of things happen, and then there’s the finale, featuring the final game against the toughest opponents the team will face.

Except it wasn’t the final opponent and the movie keeps going, leading to a rather dull climax which wrapped up some subplots that were so basic that it was hard to care about.

Speaking of clichés, the characters had quite a lot of them. Especially when it came to the team.

Once again, I’m reminded of other, better examples, like “Remember the Titans” or “Miracle.” In those movies, the players on the team had really memorable personalities and they were very relatable. In this picture, every team member simply comes off as a generic, from the one who has too much pressure on him from his parent to the jock who only cares about himself. Give me a break.

Another thing those other movies had, and also other movies such as “Coach Carter,” were charismatic, energetic coaches who became like father figures, where you felt a real bond between them and the team. This movie didn’t have as much of that. Of course this is a true story, and maybe this is the way that coach really is. And if so more power to him, he has won a ton of games with that style.

The problem is that it just doesn’t make for very compelling cinema. Caviezel plays the character in such a dull, monotone way that it simply isn’t engaging.
The supporting cast felt lacking, too. The assistant coach played by Michael Chiklis yelled a few times and there was the angry father played by Clancy Brown who also yelled a few times. But they offered no level of depth beyond that.

The only character who I was really compelled by was Laura Dern, who was fine in the role as Ladouceur’s wife. Unfortunately, though, the character isn’t on screen all too often.

Another thing I found surprising with these characters is that I don’t know if all of them were real. I know that it is based on a true story, but with most of these “true story” sports movies, the end credits show what the players did after high school, regardless of whether it’s college or a career. Here, the movie just cuts right to “Directed By,” after some real footage of the coach. It left me wondering if the characters I had been following were real.

The biggest benefit to this movie, though are the football scenes. If there’s one part to this movie that the crew got right, it was the football moments. As a major fan of the gridiron myself, I have to say that I was legitimately engaged by the those parts. They were well shot and were action packed.

Unfortunately, that’s the only real praise I can give the actual movie. The real story is inspiring, sure, but the way it was executed just didn’t deliver into amazing drama that audiences have seen in better sports flicks. The football scenes are worth a watch, and that’s about it. 2 out of 5.