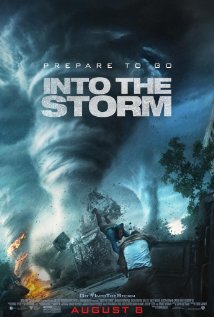 “Into the Storm” follows a group of characters in Oklahoma who face a day of danger when a huge system moves into town that produce multiple tornadoes.

Included in the stormy fray is a Vice President named Gary (Armitage), his sons Donnie and Trey (Deacon and Kress), and storm chasers Allison (Callies) and Pete (Walsh).

Their subplots all converge as they continually have to dodge tornados and seek shelter from the powerful weather.

The comparisons to “Twister” are really inevitable here. So I’ll get it out of the way up front, “Twister” is the better movie. Graphics wise, this movie may be more impressive, but “Twister” had one advantage, and that’s how it simplified its story, focusing on one group of storm chasers, a little drama thrown in, but still about the chaser team.

“Into the Storm” has so many subplots going on, and they are all cliche and uninteresting. We find out that the character Gary lost his wife in a car accident and that Allison is a single mom. We find out that Donnie has a crush and is trying to win over the girl of his dreams, and the audience also follows a group of hillbillies trying to film tornadoes to get hits on Youtube.

None of these were necessary in a film that is 89 minutes. This isn’t an epic disaster movie the likes of “Independence Day.” Simplify the story and just follow the storm chasers or thrill seekers, having everything else just comes across as cliche, poorly drawn out drama.

Another issue with “Into the Storm” is the fact that it tries to come off as a found footage film at some parts, and at other times is filmed in the traditional style. This has been done a few times in movies before, “The Fourth Kind” being an example.

It usually doesn’t end up working, though, and it didn’t work here. It’s a shame, too, since disaster movies focusing on the graphics through found footage can be a great entertaining ride, like in “Cloverfield.” The constant back and forth between styles, though, really limits the effects of actually being in the moment with the person carrying the camera.

The characters are all dull here and are played like caricatures more than anything. Pete for example is the jerk who will do anything and risk people’s lives for the story and Donnie is a typical nerd in high school trying to win the affection of the popular girl. The characters barely even had any quirks to them.
That being said, Armitage and Callies do give OK performances with what they are given to work with. There is a scene with some emotion toward the start of the third act that felt genuine.

Overall, “Into the Storm” is an unoriginal concept with dull characters and average acting that tries to ride on its CGI department. The problem is the found footage aspect of the film is never really brought to its potential making it come off as any other film. Low 2 out of 5.