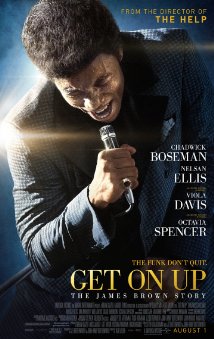 The harsh upbringing and rise to stardom is explored in “Get on Up,” which chronicles the life and music of singer James Brown. The movie shows his life as a child growing up in Georgia, how he became a singer and his eventual decline.

The film also shows some of the hardships he had in his own family life.

“Get on Up” breaks away from a traditional format of story-telling, as the film goes back and forth between different stages of Brown’s life. This helps the movie to an extent, since it is at least an attempt to break away from the normal biopic style.

There are a few downsides that remain, though. The first being the normal tropes of a musical biopic are played out. The rise to stardom, trouble with drugs, problems at home. It’s understandable, considering that this is a true story, however, the fact remains that this causes things to become rather predictable and it ends up causing some watch checking to take place.

The other issue is that the film doesn’t go into depth in a few key areas that probably deserved to be further explored. For example, there is a scene of domestic abuse, and yet after the scene takes place it’s never really brought up again. More or less it’s just glossed over. The same can be said about him as a father. The movie never fully explained how many children he had or how his relationship was with them.

What this movie does have going for it, making it completely worth a watch, was the performance by Chadwick Boseman, who was incredible as James Brown. Boseman is relatively a new comer to films, but he will be in many more because he made a statement with this role.

Boseman fully embraces being the iconic James Brown. He brings so much passion and fire into his performance, which was needed to portray such a personality. The voice and mannerisms are all fully displayed by Boseman, who has a powerful onscreen presence. His acting job deserves a look when Oscar season rolls around.

Also giving good performances were Viola Davis, Octavia Spencer and Dan Aykroyd. Despite each having limited amounts of screen time, all three give strong performances which added to the film’s credibility.

Another positive for “Get on Up” was how the music scenes were filmed. In my review of “Jersey Boys,” I criticized the filmmaking for lacking in vibrancy, color and excitement. The opposite can be said for “Get on Up.” The musical scenes are entertaining, fiery and will have audiences bobbing their heads.

Overall, “Get on Up” is more or less a standard biopic, but it is raised up a level by Boseman’s performance, a strong supporting cast and very entertaining musical scenes which capture the energy of Brown’s presence. 3 out of 5.