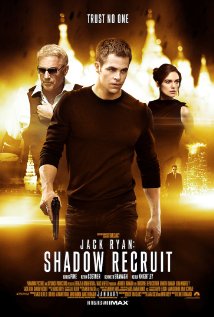 January is probably the worst time to be a film critic. Sure, the award ceremonies are fun, but almost without exception, the movies are just terrible. I’m looking at you “Devil’s Due.”

Directed by Kenneth Branagh, who also stars, the film follows the title character.

Jack Ryan, played by Chris Pine, is a former marine who now works as an analyst for the Central Intelligence Agency. While analyzing financial reports with Russia, Ryan notices an irregularity and the CIA, namely his superior Thomas, played by Kevin Costner, sends him to Moscow to investigate.

While there, Pine discovers who the person is behind the problems in the financial reports and discovers a more sinister plot. He finds Viktor, played by Branagh. Pine begins to put together his plan to uncover more intelligence on the situation, however, at the same time, his fiancee, played by Keira Knightley, comes to Russia to surprise him but doesn’t know he’s in the CIA.

“Shadow Recruit” isn’t a perfect spy film and isn’t a contender to be on par with some of the greatest of all time. The most glaring reason is the plot, especially the climax, is rather predictable. What helps it be more than just mediocre, though, is the direction, acting and the fact the story moves at a fast pace to keep things fun and entertaining.

The character, Jack Ryan, has been portrayed by Alec Baldwin, Harrison Ford and Ben Affleck in past movies, but Pine does a good job making the character his own. Pine captures a good balance as the action spy in the movie, showing that he’s not invincible but can still kick butt when he needs to. The character is also written to have a fair amount of wit, which makes him more likable.

A person who really steals the show in many scenes is Branagh, though. He plays the role of the charming, yet menacing villain extremely well and arguably delivers the best performance in the entire movie.

The supporting cast do fine work in the movie, too. Costner, for example, plays the role of an experienced intelligence agency director with a subtlety that shows he has seen his fair share of action. Knightley, who surprisingly does a really convincing American accent, also does well with the material she’s given, making her more than just a love interest for the Ryan character.

In terms of action, the film isn’t filled to the max with it, but the scenes that are in are shot intensely well, thanks to Branagh’s direction. One scene in particular features a fight in a hotel bathroom where Ryan is the clear underdog in the struggle and it keeps the audience on the edge of their seats.

Despite not being perfect, “Shadow Recruit” is still an entertaining espionage action movie and is a good place to start for a film series reboot. I wouldn’t mind seeing the series continue with Pine in the lead role. High 3 out of 5.