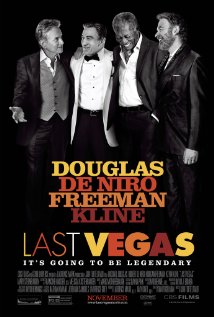 Before you ask, no, this is not just a blatant rip off of “The Hangover” with old guys.

“Last Vegas” follows a group of four friends who have known each other for more than 50 years. The group includes Billy (Douglas), Paddy (De Niro), Archie (Freeman) and Sam (Kline). Each one of them is dealing with their own issues in life, Archie has to keep track of pills, Sam feels tired of being around other seniors in Florida and Paddy is still mourning the loss of his wife.

The one that has things going right is Billy, the most successful of the group. Billy plans on getting married to a woman much younger than he is in Las Vegas and wants to hold a bachelor party with all of his buddies.

“Last Vegas” doesn’t feel like the most original comedy out there. It’s not directly like a film such as “The Hangover,” however, it does fall into some familiar territory and it doesn’t feel all too fresh. That being said, there are laughs throughout the entire run time and some heart to go along with it which raises the bar. Each character sort of has their own arc that they go through in the movie, and it works to hold the interest nicely.

The best part, obviously, is the talent in the movie. Not only are the four veteran actors really good here, but their characters have a believable camaraderie, too. Seeing each one interact with each other is fun and feels real. None of them really ever upstage each other either, they all get their chance to show off comedic sides which makes the film more fun.

Being only a PG-13 film, the comedy never gets all too raunchy, but it doesn’t really need to. The humor works well enough on its own. Some of the jokes are misses, but the ones that work do get true laughs.

Overall, “Last Vegas” is rather predictable and not very original. However, the veteran, Oscar caliber cast, make for a fun ride from start to finish and can keep an audience happy. There’s a bit of depth that goes along with it, too, giving the film a nice emotional side. High 3 out of 5.