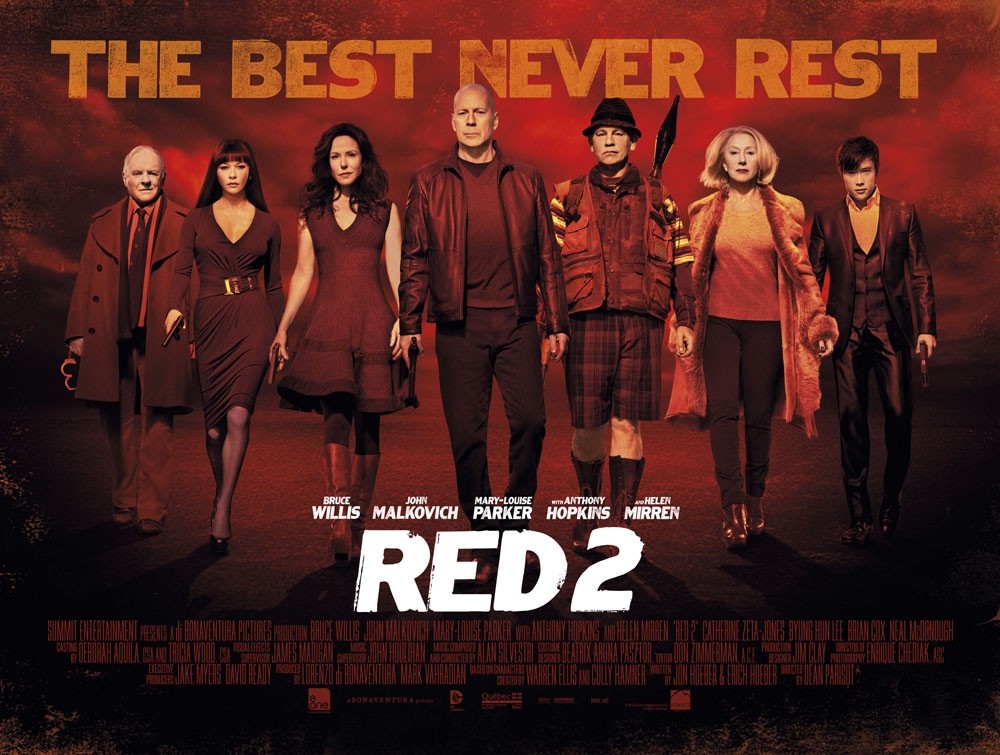 Willis is really starting to play the same character in his movies lately.

“Red 2” picks up an unannounced time after the first film. Retired CIA agent Frank (Willis) is trying to live a fairly normal life with his girlfriend Sarah (Parker) after being involved in a massive plot. The action seems to come back into their lives though as Frank’s partner Marvin (Malkovich) informs the two that they have all been targeted by government agencies for a mission they were involved in during the Cold War that involved a weapon of mass destruction.

From this point the three have to go on the run again and try to clear their names. During their mission they are joined by MI6 Agent Victoria (Mirren) and eventually the scientist who created the weapon, Bailey (Hopkins). The team has to watch out on their mission as they are chased by assasin Han (Lee).

The film jumps right into its plot very quickly and from there it sets up a very predictable spy action film. From the element of going from country to country to the climax, there’s nothing really new going on here. Despite the story being simple though, it moves along fast enough and doesn’t drag along, which really helps in an action movie. At the very least, it’s entertaining enough to keep one’s attention.

The characters are just average though. Once again, the main gimmick of the film, like the first, is that it’s funny that old people can fight really well. The acting from Malkovich, Hopkins, Willis and Mirren isn’t bad, since they are all veterans and can deliver lines well enough, it’s more or less the material they are given isn’t very strong. What does work well though is the back and forth between Malkovich and Willis, the two have a nice chemistry when working together.

The character that really drags the movie way way down though is Sarah. The character is made to be the comic foil, as she is inexperienced to the whole spy world. The problem is that the character acts like a giddy school girl, being overly jealous in one scene, and bumbling around and screwing up a mission in the next. She was almost like the Jar Jar Binks of this movie. Plus there is almost no believability of Willis and Parker as a couple.

A very welcome addition to the cast is Byung-hun Lee, who plays the assassin character Han. Lee brings a nice charisma to the movie where he can balance being a bad-ass and deliver some comedy. It would be nice to actually see a flick with him playing a lead role.

Speaking on the main selling point of the movie, the action, it was just OK. Some of the fight scenes were cool and well choreographed, for example one between Willis and Lee. However, in other parts, especially the car chases, the action was just lackluster.

In my review of the first “Red,” I said that the movie was just comedic enough and just entertaining enough to stay interested in the film, and this is the case here too. “Red 2” is predictable, the character Sarah is just too over-the-top with her goofiness, the other actors don’t have the strongest lines and the action isn’t always exciting. Yet the film isn’t a total loss. The movie is good enough for a Saturday afternoon matinee to kill a couple hours, just don’t expect anything more than that. High 2 out of 5.