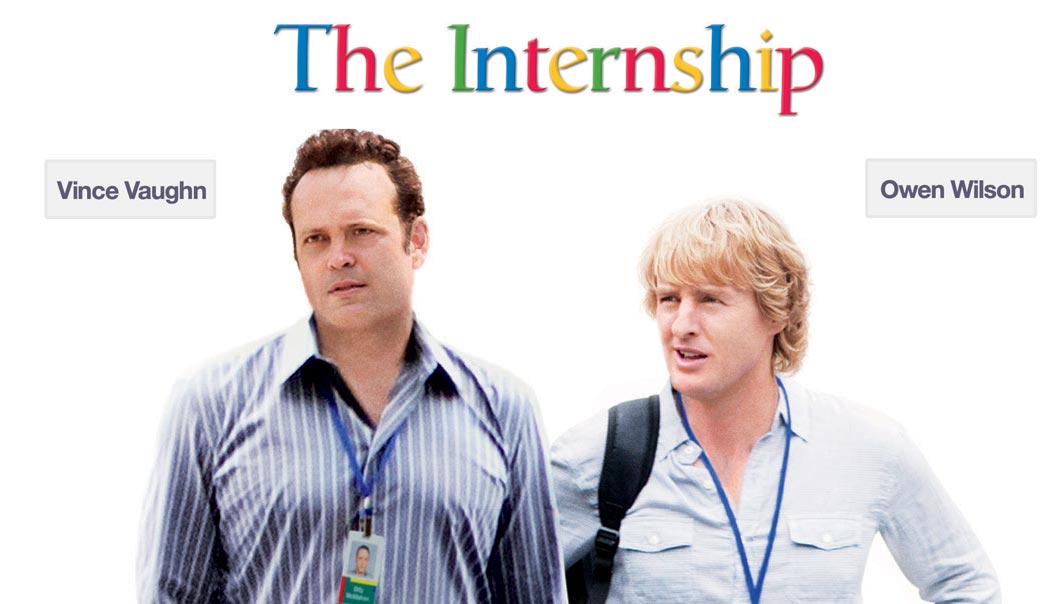 In case you didn’t know that Google was a sponsor for this movie, it will remind you about a thousand times.

“The Internship” follows two salesmen, Billy and Nick, played by Vince Vaughn and Owen Wilson, who sell watches at their company, owned by their boss played by John Goodman. Things take a turn for the worse though as the company gets shut down and Billy and Nick are left without a job and have to find employment elsewhere.

Billy eventually gets the bright idea to join an internship at Google for an opportunity at getting a job. The duo become interns and find they have to work with a team of young misfits through the summer to win the job against other intern teams. The only problem is the protagonists don’t have any computer experience. However, they do have people skills.

Everything in “The Internship” has been done before. The story is a classic band of misfits who screw up at the start, but eventually, as time goes on, they learn to work together and become a team. This becomes a problem as the movie relies on jokes and gags the audience has likely seen before.

Vince Vaughn and Owen Wilson team up again, having worked together in the 2005 comedy hit “Wedding Crashers.” The two still have chemistry from that movie and both have comedic timing. Vaughn and Wilson are very capable comedic actors, but they just aren’t given enough in terms of good humor. To their credit though, they try hard with what they were handed and do raise the bar a bit.

There was also a forced romance between Wilson’s character and Rose Byrne who played a Google exec. The romance not only lacked chemistry and felt all too predictable, but it didn’t add anything to the overall story either. The whole side plot could have been cut from the movie entirely, slicing down the run time and it wouldn’t have mattered.

The romance didn’t work, and neither did the side characters. The team Vaughn and Wilson mentored have their own traits and that’s where all the jokes about them are drawn from. The film also has some very forgettable antagonists who feel really stock. Think of the Omegas from “Animal House.”

To be fair, the comedy is never truly bad and there aren’t any jokes that produce cringe-worthy moments. Yet, the humor just isn’t that strong. The movie can provide some laughs here and there, but most are chuckles at best and any major ones are few and far in between. “The Internship,” seems to play things a little too safe. The comedy doesn’t take any chances, nor does it offer anything edgy or fresh.

“The Internship” isn’t worth the price of an admission to see. It can provide some laughs and Vaughn and Wilson are likable enough protagonists who can keep an audience entertained for the run time, but this is no comedy classic. This is one to either wait for on DVD or cable. High 2 out of 5.