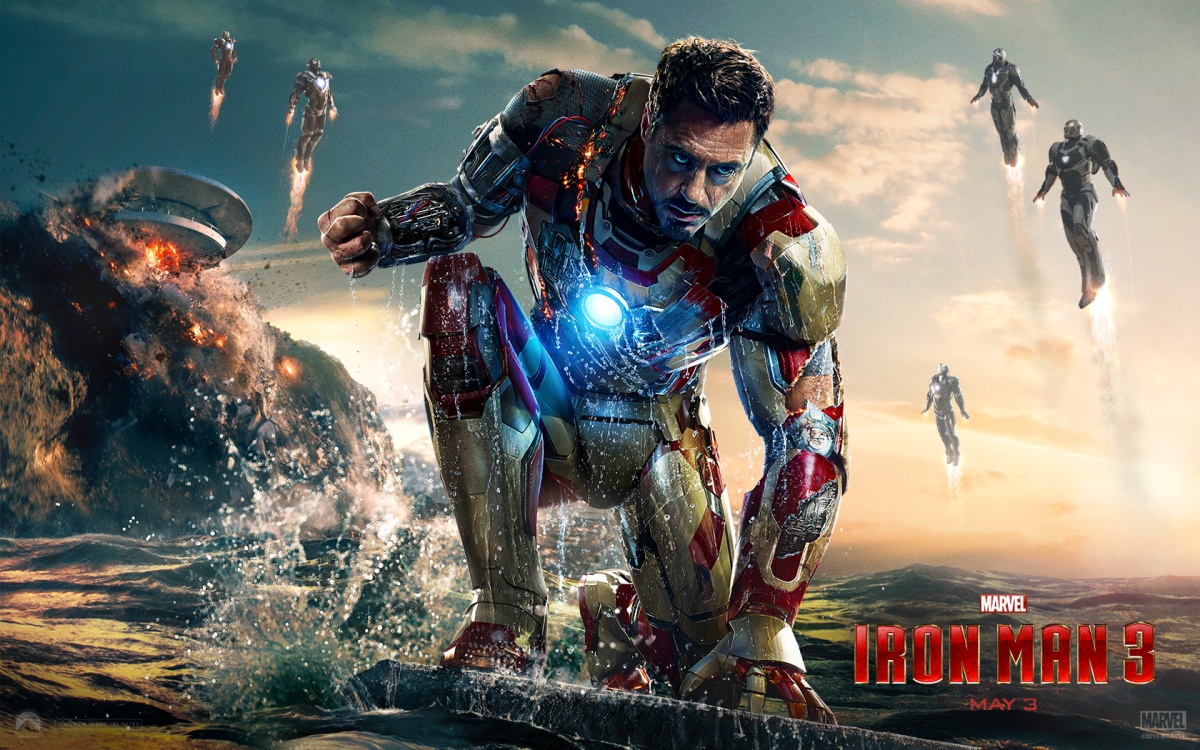 The 2013 summer movie season starts with a lot of booms, most of them coming from Tony Stark’s house getting blown to bits.

The third installment of the “Iron Man” franchise picks up not long after the mega super hero team up film “The Avengers.” After the events in New York, billionaire, Iron Man inventor Tony Stark (Downey Jr.) is trying to move on and live his life normally. However, because of the events that occurred with the alien attacks, Stark has been feeling nervous and has had anxiety attacks. To deal with this, Stark has been building multiple versions of his high tech suits.

While this is going on, a new threat begins to rise with an international terrorist who calls himself The Mandarin (Kingsley) starts taking responsibility for a number of mysterious bombings. At the same time, a man who has his own science corporation, Aldrich Killian (Pearce), has his own mysterious dealings going on and could possibly be connected to The Mandarin. Because of the threat that is brewing, Stark has to fight against The Mandarin, yet he finds himself short of much of his technology.

“Iron Man 3” is a very exciting summer action movie. To the film’s credit, the three act structure is very strong, things flow well and there isn’t a lot of drag that makes one check their watch. A good portion of the film is very well written and is above most other summer blockbusters. I don’t say all of the writing because of a major plot twist that threw me for a loop.

I won’t spoil what the twist is, but I will say that it shifted my view of nearly the entire second half of the film. The twist has to deal with the villains and from that point on the film feels disappointing and lackluster. There is an exciting climax and still good moments; however, on a first viewing it’s hard to ignore such an unneeded plot twist. I’ll just say that the film should have stuck with one villain, either have the Mandarin or have Killian, because the twist they have doesn’t work.

Robert Downey Jr. once again reprises his role as Tony Stark and he is a master of the character. Downey basically is Iron Man now having made the character believable and connectable. The story arc he has in this film, about trying to figure out if he really needs all of his suits to be Iron Man, is interesting, yet the anxiety attacks felt too over the top.

In the first “Iron Man,” there were many moments when the audience could see just how angry Tony Stark was at times just by Downey’s acting abilities and his facial expressions.

The anxiety attacks in the film just seem to push something a little more than it needed to, instead of being subtle and affective. That being said, Downey does have some many great moments and Stark still has his smug and snarky attitude that we all love.

The supporting cast for the most part is good. Paltrow once again plays Stark’s girlfriend and assistant at his company Pepper Potts. Paltrow once again gives a performance that captures Pott’s ability to really ground Stark. As a bonus, we finally get to see Pepper in action in some scenes.

Don Cheadle also returns as Stark’s best friend and Air Force Colonel who pilots a piece of Stark tech called War Machine which gets renamed to Iron Patriot. Cheadle feels more natural and believable in the role than he did in “Iron Man 2” which is great. Cheadle also has more action in the film, which is welcome, at the same time though he doesn’t get as much time using the Iron Patriot suit as much as I would have liked.

Stark also got help from a young character named Harley played by Ty Simpkins. The scenes that they interact are pretty good but weren’t necessarily needed for the film to work. The couple scenes made for some good humor, yet at the same time I think they could have been cut or changed and it wouldn’t have mattered too much.

On the villain side, I felt that Ben Kingsly at first glance was really doing a great job being threatening. However, after the middle of the movie, I really feel like they completely wasted Kingsly’s acting abilities.

When it came to Guy Pearce, he seemed a little replaceable. There was a moment when he does a monologue to Stark that just felt generic as if any villain could be there. His motives never seem really clear and he doesn’t ever seem all to threatening, at least compared to those that came before like Jeff Bridges or Micky Rourke.

Some of the rest of the supporting cast also felt a bit pointless. Rebecca Hall, who played a scientist and former friend to Tony Stark, seemed to have a character that was really underwritten. I never seemed to get too much emotion from her story.

The same could be said about Jon Favreau who plays Stark’s friend and other assistant Happy. Once again, Favreau seems to try to do what he can with the material. Yet the material never gives him more to do than be comedy relief, almost to the point of seeming like one of the three stooges at times. This is made worse when Happy gets injured in a Mandarin attack and him being a comedic type of character made it difficult to really feel too upset about the event in the film.

This was the deal with a few of the jokes that happen in the film. While there are plenty that were well placed and did deliver some very good laughs. There were also some that were a bit out of place and could have been cut, for example there is one towards the end that just felt unnecessary considering the circumstances of what has just happened.

The movie also raised some questions. For example, the super agency that assisted in “The Avengers” and Stark himself in “Iron Man 2,” SHIELD, are nowhere to be found. Where was SHIELD? It’s understandable that this isn’t an alien attack, however compared to the events of “Iron Man 2,” the things that happen in this movie seem well within their territory.

The same could be said about The Avengers Tower which we see in development at the end of “The Avengers” but don’t see in this film. Maybe they are saving it for the next Avengers movie, however I would figure after the events that happen in this movie, Stark would access his home away from home. Another question that comes to mind is where was AC/DC. The band has become a staple of these films and I didn’t hear any of it, not that the score in the flick was bad, but there were plenty of moments when AC/DC would have been perfect.

What was next to perfect in the film, though, was the special effects. The effects in this film are top notch, and it shows during the credits with all of the names that are displayed that worked on it. What instantly comes to mind when thinking of the effects in “Iron Man 3” is the climax. There is so much going on, so many Iron Man suits and so many tiny, moving mechanical parts. It’s hard not to think about how much time it took to show Tony Stark jumping from suit to suit and the pieces of the suit connecting and powering up. The special effects were the hallmark of the film.

All of the massive nitpicking aside, “Iron Man 3” is a good summer action blockbuster.

In the end though, it’s worth watching, and it looks so good that it deserves being watched in the theater. If you’re looking for the absolute perfect comic book, super hero film in “Iron Man 3,” than you’re looking in the wrong place. However, if you want a good, well put together action film with some flaws, it works. “Iron Man 3” gets a very high 3 out of 5.