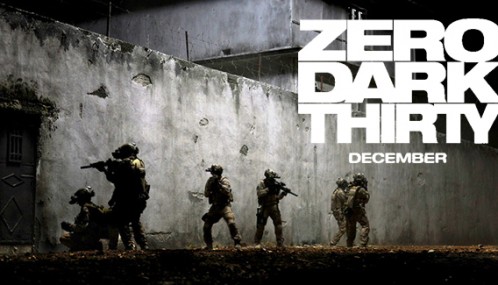 “Zero Dark Thirty” is based on the true story of the manhunt for Osama Bin Laden, starting with the attacks on 9/11. It takes an in-depth look at the tracking of Al Qaeda during a 10-year period through the eyes of a CIA operative who is part of the task force to find its leader and the No. 1 target of the United States.

The CIA operative, Maya, is played by Jessica Chastain. Maya travels much of the Middle East in the movie, interrogating a number of different detainees and using the extent of U.S. technology to try and put the puzzle pieces together. Through the film, she sticks to the hunt and becomes obsessed with Bin Laden.

The film’s plot feels very much like a chronicle of events. It’s a type of film that just builds and builds until the climax comes and makes for an intense finale. The way it’s put together works to a point. While there are many interesting scenes that feel very engaging, at the same time, it sometimes felt a bit too documentary-like and lacked a real emotional connection.

The film seemed to draw more on the audiences remembrance of the events for its emotion than actually portraying it on the film through its characters. This knocked down the plot a bit for me. This isn’t to say the film is boring, it can keep an audience on the edge of their seats.

Maya, the main character, was probably the reason for the emotional disconnect. We see her character completely obsessed with the hunt for Bin Laden. We know it’s taking some kind of toll on her, but we never get a sense of just how much.

Chastain does a good job of playing a strong character who will stop at nothing, yet we never get to see her go into more depth of who her character really is besides her job. This is what really gave the film more of its documentary feel. We didn’t see further behind the scenes action with our main character. The character is still likable though.

The rest of the cast is well played, but not as memorable. Jason Clarke who plays Dan, another CIA operative, was good and gave a fierce performance, yet his character leaves halfway through the film, which leaves a bit of a gap.

The direction of the story is without a doubt the most fantastic part of the picture. Kathryn Bigelow put a lot of work into the film and it shows. So many of the landmarks in the film are made to look exactly like Bin Laden’s actual compound. For example, they recreated Osama Bin Laden’s compound in Pakistan.

The recreation of the operation to assassinate Bin Laden, officially called Operation Neptune Spear, in the film’s final half hour is the most thrilling piece of filmmaking this year. Bigelow and her crew are so precise with having all the personnel carry the right equipment and things that were used during the 10-year period.

“Zero Dark Thirty” is a great film, but not a perfect one. The characters and plot do not have any real emotion, especially right before the credits roll.

Yet the precise and visionary filmmaking done by Bigelow makes for such an intense, engaging thrill ride that it is still by far one of the best movies of 2012. Solid 4 out of 5.

This review was first published in the Jan. 18, 2013 issue of the Wahpeton Daily News.