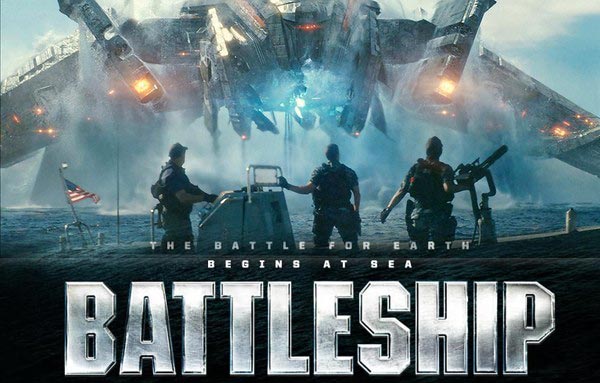 The film follows a character named Alex Hopper (Kitsch). In the beginning Hopper is mainly a screw up, getting in trouble with the law and not having any real direction. After one night of breaking into a store to impress a girl named Sam (Decker), his brother gets fed up and tells him to join the U.S. Navy.

The film suddenly cuts to an unspecified amount of time later where Alex is now a Lieutenant and has gotten together with Sam who happens to be the Pacific Admiral’s (Neeson) daughter. We catch up with Alex as he is participating in a Naval event with 13 other nations. As they begin an exercise they come across an alien craft that begins an attack on Earth. After Alex’s brother is killed he is advanced to captain and has to fight back against the alien threat.

There are so many things wrong with this plot, mainly the entire alien invasion scenario. However, my problem really comes with the character arc of Alex. Through out the entire film everyone says that he has all this potential, and yet we never really see signs of it until the very end. Not to mention the fact that it just skips his entire time of training, out of two hours they couldn’t even throw in a montage?

His plot kind of reminded me of the story Captain Kirk had in the 2009 Star Trek film. In that movie Kirk was a rebellious character but over his time at the academy we actually got to see the potential and smarts he had, so despite him being a bit of a jackass he was also likable, plus he had a crew that was likable too, and well acted to boot.

In “Battleship” we see something similar, Alex is rebellious and he is thrust into the captain spot too, however we haven’t seen any of the potential people talk about, he is never really likable, and the crew he takes over isn’t likable either really. This causes the majority of the film to go down because this is the character we are rooting for and yet he just isn’t that great.

The acting is awful too. I don’t know if we are going to be seeing Taylor Kitsch in many movies after this as his track record may be starting to work against him here. He doesn’t give any life to the character Alex, not that there was that much to work with but Kitsch never adds any depth to him, similar how he added no depth to John Carter.

The only shining spot of acting was Liam Neeson who probably only has 13 minutes of screen time at most. Other than that we get to see Brooklyn Decker play a love interest, which is fine, only the romantic development all took place off screen so we don’t really get to see how the relationship between her and Alex was built.

The rest of the crew with Alex was awful too, especially Rihanna, who really had no business being in here. Jesse Plemons also played a member of the crew, the comic relief character, unfortunately the dialogue he is given is not funny in the least.

Another character who was poorly played was Mick Canales, who was portrayed by Gregory D. Gadson, a real amputee and former member of the U.S. Army. The problem with him in this movie though, like “Act of Valor,” is that he couldn’t really act. Every ounce of dialogue he delivers is done in a monotone voice. This is bad because when you have such an unbelievable event happening in the film like an alien invasion, someone reacting like he does to everything just takes a person out of the experience.

But of course, the main reason that this film was made is special effects and action, and some of it was alright. Unlike some of the Michael Bay “Transformers” films, you can actually tell what the hell is going on in some of the battle sequences, there are also moments where they have to use a bit of strategy in battling the Alien ships. However at the same time they have these round alien attack ships that just blow up random things and, the film could have done with out them. The special effects are nice, though.

It’s not the worst summer blockbuster out there, but it’s still pretty bad. 1 out of 5.