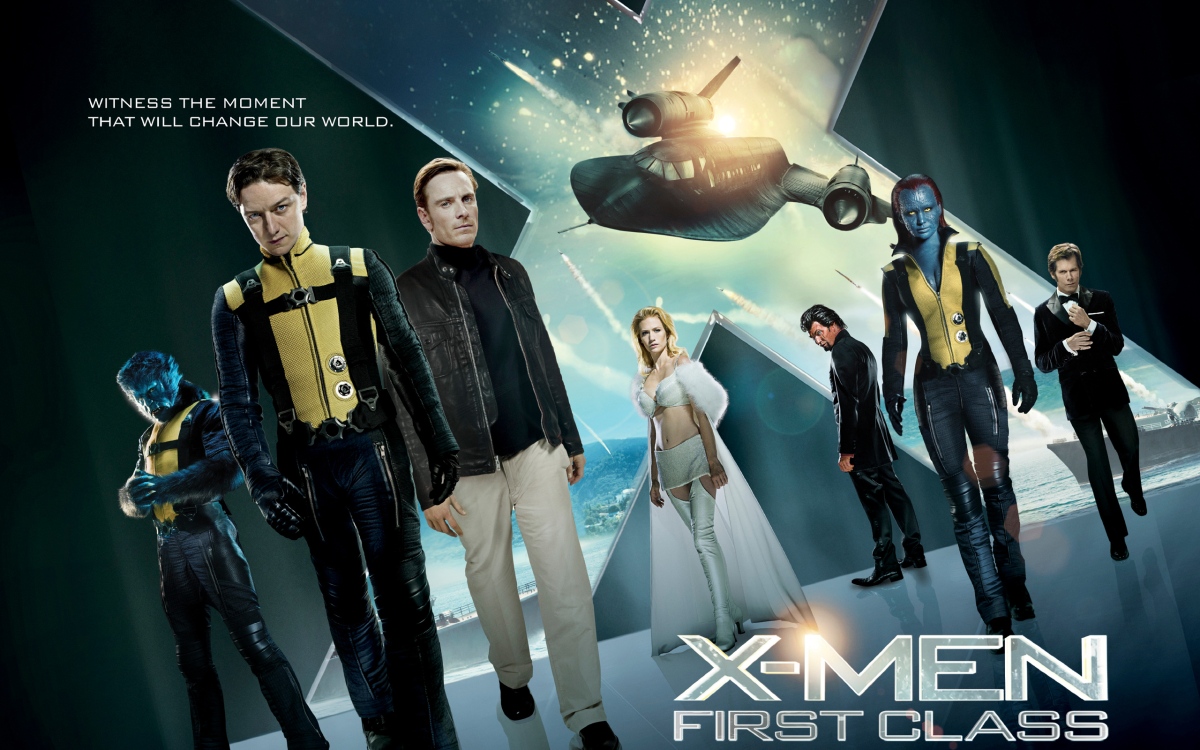 Arguably the best X-Men movie out so far.

X-Men: First Class tells the origin story of how the X-Men and the Brotherhood of Mutants came to be by going into the back stories of both Charles Xavior (McAvoy) and Eric Lehnsherr (Fassbender). We begin with their youths, Xavior growing up and learning that there were others like himself by meeting a young girl who can shape shift into any person named Raven, meanwhile Lehnsherr grows up being experimented on and treated poorly under the watch of Sebastian Shaw (Bacon), who has plans of world domination through mutants.

Once the two reach adulthood, the CIA contacts Xavior to help learn about the growing number of mutants appearing, Meanwhile Lehnsherr is out getting vengeance on those who had ruined his childhood and destroyed his family. Eventually the two characters meet and decide to seek out and help young mutants in the world. However once they gain light of Shaw’s plan they realize that he needs to be stopped and set out to deal with him, the two protagonists also learn that their ideals may be more conflicting than they first thought.

The story is told exceptionally well and is really set up the way an origin story is meant to be. In a way, the film was very similar to the 2009 “Star Trek.” We not only find out how these characters get into the positions they’re in later in life, but why they became who they are.

The film combines the two stories of trying to stop a super villain, and the tragic destruction of the friendship between Charles and Eric. The film does the latter much better. The super villain plot with Shaw is alright, but it’s mainly just to give a bedrock for the film’s main story to be told, and that story is told very well.

The performances in the film were pretty good for many of the characters, but were absolutely phenomenal when it came to the two main protagonists. I haven’t liked James McAvoy on screen this much since “The Last King of Scotland.” He felt really natural in his role of Charles and made for a likable, understanding character.

Meanwhile, Fassbender, who I’m not as familiar with, was great as the future Magneto, really being able to display the emotion and rage that is in Eric’s heart, and portray it to the audience. The level of chemistry between McAvoy and Fassbender is great too, their work was really stellar, especially considering that they had to fill the shoes of Patrick Stewart and Ian McKellen.

The supporting cast was great as well. Jennifer Lawrence had a convincing performance as Raven/Mystique, who was part of the tragic friendship that took place onscreen. Bacon, who played his role with a fair bit of camp, was over the top in many scenes, but was still an OK villain.

The only weak performance featured was from January Jones who portrayed Emma Frost. It’s understandable that Jones wanted to make the character cold, since she is a villain, but it came off more as emotionless and she had no screen presence.

The action in the film is alright. There are some great moments towards the end, however I wouldn’t say that the special effects are the most amazing I’ve seen in all of the X-Men films so far. Still the scenes were still engaging, especially because of the characters in the film.

Overall, X-Men: First Class is one of the best comic book movies, let alone just one of the best movies of the year so far. The onscreen performances of Fassbender and McAvoy made for a great, thrilling and tragic story so I’ll put this at a high 4 out of 5.