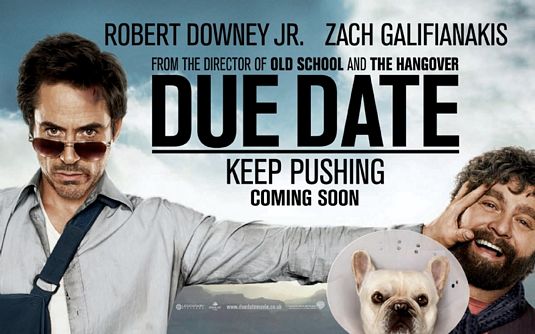 Be prepared, I may mention “Planes, Trains, and Automobiles” a bit in this review.

Robert Downey Jr. plays Peter Highman, a straight laced business man who is trying to get back to his home in California. He arrives at the airport and he meets the character Ethan Tremblay (Galifinakis), a person who is kind, but extremely clumsy, bringing a bit of destruction with him. Both Peter and Ethan end up on the same plane and after some wild antics they are thrown off the and Peter is put on the no fly list and is left without his money or passport.

After leaving the airport, Ethan comes by with a rental car and offers Peter a ride since he’s going to California too. Peter accepts since he has no other option. However, Highman’s nerves begin to be pushed to the limits as he finds Ethan to be completely stupid at every single level.

The story of this was in fact, really similar to “Planes Trains and Automobiles,” a business man and a more loose person traveling cross country to make it some where in time for something. However, it’s differentiated by not having the heart or even as much of the comedy. It was just move on to the next place, have Ethan do something dumb, Peter gets angry, rinse, repeat,

The biggest issue with this is there seems to be zero development. The movie tries to convince the audience that the characters gradually become friends, but it never feels authentic.

In these types of films, the characters have to be effective in conveying that lead up to friendship and “Due Date” doesn’t have that. Likely the biggest problems are the extremes the two characters are taken to. Ethan is too obnoxious and Peter is too mean spirited. Many of the attempts at humor seem a bit cruel.

I think there was potential with these two actors, too. Casting Downey Jr. as the uptight businessman could’ve worked and Galifinakis has shown before that he’s more than just his character from “The Hangover.” The characters, though, were just unlikable and the two actors didn’t seem to have much chemistry.

I know I compared it to Trains Planes and Automobiles a lot but that’s really what came to mind the most while watching it. I’m going to barely give this a low 2 out of 5 just because it made me chuckle a few times and it wasn’t particularly the worst comedy.