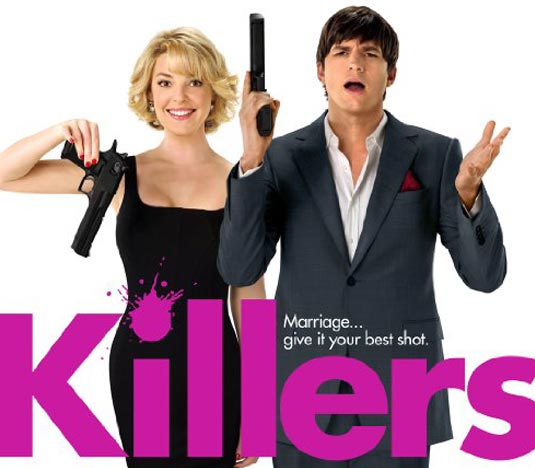 After seeing this I felt like I had been punked out of my money when leaving the theater by Mr. Kutcher.

The film follows Jen (Heigl, who while on vacation with her parents meets another single named Spencer (Kutcher). Although they have an awkward meeting, the two hit it off and eventually get married.

Their relationship starts off well enough, but after settling into their lives things begin to change. This is mainly due to Spencer being a spy and having people out to kill him. The result is Spencer going on the run with his wife.

The film is a complete mess in terms of its story telling. Not only does it feature cliches in the action and romcom department, the filmmakers couldn’t seem to decide on a good tone for the flick, either. Sometimes it seems to lean toward a more satirical look at marriage and other times it goes for over the top action comedy and it simply never meshes.

The script was lacking, too, with much of the dialogue trying to come off as witty, but feeling more mean spirited, making much of the picture unlikable. Additionally, the film features a twist toward the end that crashes the whole thing even more.

The worst offenders in the film, though, lie with the performances. Heigl, for example, did nothing with her character but shriek, yell and whine. This became grating really fast and made her intolerable.

Kutcher, meanwhile, was basically just playing himself which isn’t saying too much. Kutcher isn’t awful in comedic roles, but he just doesn’t have a high level of screen presence and he also doesn’t have chemistry with Heigl.

The action in the film was likely the best part of the movie. Despite the acting being bland and annoying and the story and the script not holding much weight, the action sequences were actually somewhat competently made.

In the end, that’s not much of a saving grace. The action might have at least made this watchable, but all of the other issues along with that horrific plot twist at the end push this one far down. 1 out of 5.