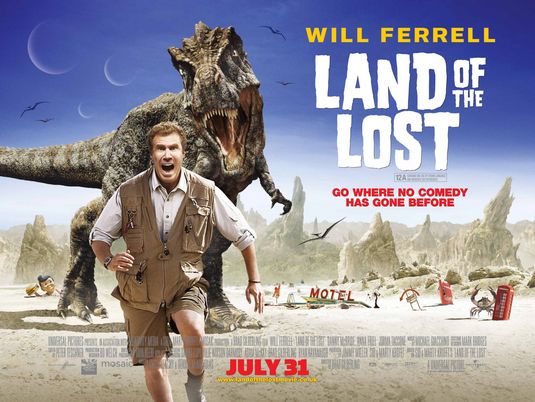 You know a movie is bad when it makes you want to stare at the ceiling rather than the screen.

In “Land of the Lost,” a re-imagining of the original 70s TV show, audiences follow the story of Rick Marshall (Ferrell). Rick is a sort of crack scientist who’s discovered another dimension and is trying to make a way to get to it. Eventually one of his fans, another scientist named Holly (Friel) helps him find a portal and the two, along with another man named Will (McBride) get transported to the other world.

However, the dimension they go to immediately shows itself as dangerous and they have to find out a way to return home.

This movie is easily in the running for worst of the year. It’s damn terrible from start to finish. One reason for this is the downright lack of any sort of direction or coherency. The film tries to be an adventure to get back to the real world, fair enough. However, the movie doesn’t throw in any clues for the characters to find to solve their issues. It’s basically just watching the three main characters run from place to place with no real coherency. Many of the film’s scenes in the middle act could be rearranged and it wouldn’t matter.

The film has a ridiculous, laughable climax, too. This would have been fine if it had been more satirical, but the humor is going for such a low denominator, that there’s never enough wit for satire.

The characters were absolutely terrible, with none of them having any substance. Anna Friel was there just to be in a badly written romance and McBride just played the typical bumbling guy. Farrell, who usually provides some good humorous performances, didn’t have much to do with his comedic timing here. His character was so ridiculously bland.

The worst character, though, undoubtedly, was Chaka. A primal human the characters discover, Chaka was basically there to repeat the same joke over and over: he’s stupid. That’s not funny. No matter how many stupid things he does, in every damn scene, IT’S. NOT. FUNNY!

Were some of the effects OK on screen? Yeah, a few were here and there. But some cool effects isn’t enough to save this mess with its disjointed story and horrible characters. If not for the CGI featured, this would be 0.5. It’s still bad, so it’s a 1 out of 5.