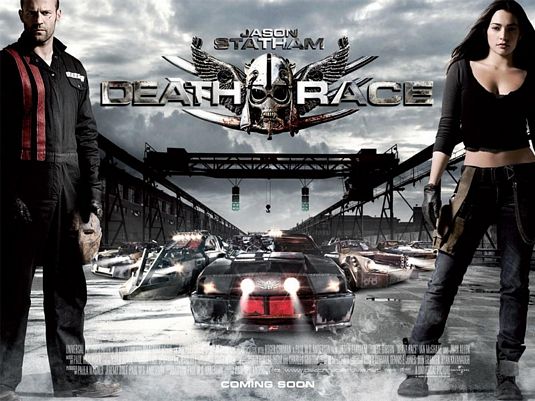 Cars that shoot other cars. How could you go wrong?

“Death Race” is mainly centered on the character Jensen Ames, a blue collar factory worker trying to support his family in a depression after getting famous as a NASCAR racer. He is framed for murdering his wife, though, and sent to a prison to compete in Death Race.

The event is a wild tournament where prisoners are sanctioned to use weaponized cars in a race. If the prisoners win enough times, they get to go free. Jensen is hesitant at first but decides to take the opportunity to get out.

“Death Race” is classic exploitation cinema. Similar to last year’s “Grindhouse” double feature which included “Death Proof” and “Planet Terror,” “Death Race” opts to sell itself on extreme violence, over the top action and some campy acting. Fortunately for audiences, the filmmakers nailed their attempt.

The movie simply delivers a barrel of fun, with the car chases being fast, furious, gritty and exciting. The movie manages to up the stakes in the races, too, for example adding a weaponized semi truck later in the picture.

The acting in “Death Race” is also serviceable. It’s nothing masterful, but there’s a hammyness in the delivery that actually works here. Statham, for example is the grizzled wrongly accused prisoner who’s tough but still has a good heart, and he gets the role right.

A bit forgettable, though, was Tyrese Gibson. His character ranged from loud and brash to quiet and cold and Gibson couldn’t seem to find a balance.

Additionally, the plot is paper thin, providing nothing but a string to connect each race. The rest of the cast is below average, too.

The film isn’t by technical terms, a good movie, but it is a fun picture that one can enjoy for its action sequences. Very high 3 out of 5.